A slow swinging of the head from one side to the other; the elephant stands Attentive and Vigilant, typically Freezing and Ear-Spreading. Head-Swinging is most often observed when a group of elephants is facing a threat. Adult females often Head-Swing in unison, as if choreographed.

Head-Swinging is also associated with Contact-Calling and other situations where an elephant appears to be Listening and attempting to localize a call or other sound. Head-Swinging likely functions in sound localization as well as acting as a visual signal to other elephants to draw attention to a threatening situation.

All age/sex groups may be observed to Head-Swing, although newborns, infants and young calves appear oblivious to threats that engage older elephants in a family and typically do not participate in communal Head-Swinging.

This behavior occurs in the following context(s): Conflict & Confrontation, Vigilance

Part of the I family including Iria, gf0045 and Iphegenia, gf0046, and other family members. Iphegenia adopts an exaggerated Standing-Tall and then Charges several paces toward the vehicle. She stops and then Back-Towards her family. She and a younger female begin Head-Swinging. The younger female dusts - an example of Displacement-Grooming. (Gorongosa, Mozambique)

gf0070 is apprehensive and vigilant. She stands facing away from us Head-Swinging. (Gorongosa, Mozambique)

Berta, gf0009, is Listening and Head-Swinging. She has a newborn and a 4.5 year old calf both of whom were Double-Suckling before this clip starts. The older calf was Suckling on her right side and came around to her left side, where the newborn was standing, and Solicits-Suckling with an elongated Periscope-Trunk. Berta begins to walk and the calf gives up and returns to the other side. Berta Head-Swings throughout as she act vigilant. (Gorongosa, Mozambique)

Qasima and part of her family are by the KH4 waterhole (photographer off road) departs. Because this vehicle is off-road and she is not used to them being there, she is suspicious. She Listens to the vehicle depart and follows where it is going by Head-Swinging (to help localize the sound). She also uses Periscope-Trunk, drawing attention to potential danger, and then departs followed by her calves. Other members of the family pay attention to her, are alert and use J-Trunk - note that even the female who is turned away is alerted - perhaps by Qasima's silence. We did not hear any Rumble. (Amboseli, Kenya) 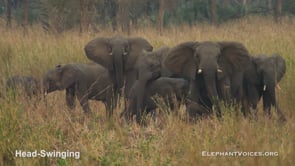 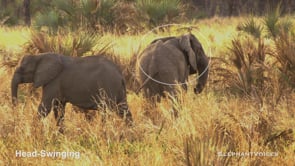 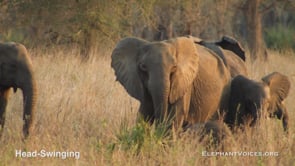 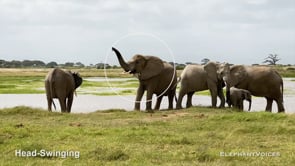