An adult female rejecting the suckling advances by her calf by physically blocking access to her breast with a foreleg.

Adult female Rosetta and her 7 year old daughter are in view. Rosetta's daughter Solicit-Suckle using her trunk to grasp her mother's breast, but Rosetta Reject-Suck using a Foreleg-Block to block her daughter's access and a Body-Nudge to push her away.

Her daughter tries to cozy up to her mother by going in front of her and under her Social-Rubbing and then tries to get in on the other side - but there is no space. She stays for some moments standing face to face with her mother. After the end of the clip she tries around the back but that attempt does not work either. (Maasai Mara, Kenya) 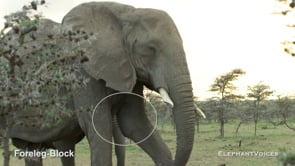