Juvenile female about 6 years old is engaged in Foot-Swinging Displacement-Object-Play and Trunk-Sucking. She fiddles around with a stick. In the context she appears to be bored and Waiting for others to move along. They are slowly moving while feeding. (Maasai Mara, Kenya)

A 4-5 year old male calf is Foot-Swinging as he stands J-Sniffing, Ear-Stiffening as he Listens attentively. He seems to be aware of movement behind him and is perhaps apprehensive about what is taking place - all of a sudden all begin to move. It is also possible that his Foot-Swinging is an intention movement as he waits for others to move, but that sort of signaling of intention is not common in calves. (Maasai Mara, Kenya)

Latino wants to go down into the lugga to the water. She stands on the edge of the steep bank Foot-Swinging. Then rumbling begins that sounds like a Let's Go - another starts it, then Grumpy Grandma f0412 rumbles (can see her Ear-Flapping) and then Latino. Her Foot-Swinging could also be an intention movement since it is associated with Let's go rumbling. (Maasai Mara, Kenya)

A family group is moving while feeding. Some elephants seem to be anxious to move a bit faster. A young female at the front of the group stands and begins Foot-Swinging. In the next scene a large adult female stands Foot-Swinging as she waits to step forward to Foot-Slice a sapling. The same young female who was first Foot-Swinging stands Waiting for the larger female to finish and then when she can moves gives an Ear-Flap-Slide - another intention movement - as she begins to walk forward. (Maasai Mara, Kenya) 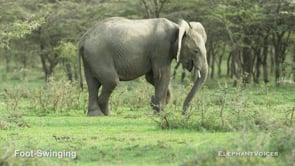 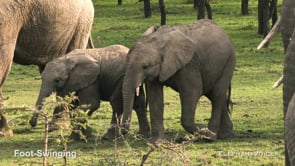 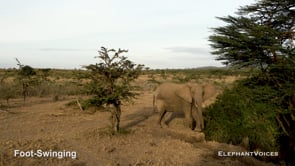 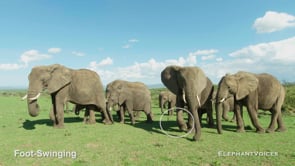