Raising and holding a foreleg off the ground. Raising and holding a hind-foot may also be observed although this is less common than a forefoot. Individuals in all age sex groups may Foot-Lift in Submissive, Ambivalent and Conflict & Confrontation contexts when unsure of what action to take, as in Displacement-Behavior. Likewise, all age sex groups may Foot-Lift In Attentive and Vigilance contexts as seen during Freezing behavior, when elephants may be feeling for or picking up seismic vibrations.

In a Movement Space and Leadership context Foot-Lifting is observed among adult females as a signal of intention - i.e. an Intention-Movement - for example, as a component of the Let’s-Go-Stance.

Tuskless female, Valda, stands Head-Swinging and Foot-Lifting. Then she begins a Perpendicular-Walk, which appears to be a signal for one-tusked Vigilante to Charge. (Gorongosa, Mozambique)

Adult female gf0070 starts to walk toward us but then sees us and stops and starts first Foot-Swinging and then Foot-Lifting. The calves stand waiting. (Gorongosa, Mozambique)

A young male crosses the road and shows signs of apprehension and vigilance - Tail-Raising and then pausing on the other side of the track to lift a hind foot - Foot-Lifting. (Gorongosa, Mozambique) 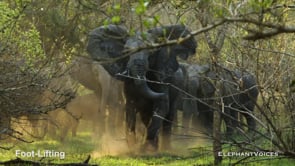 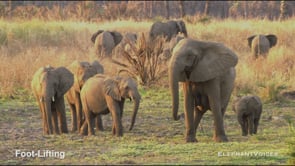 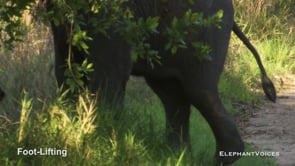