Edward O. Wilson in Gorongosa: A WINDOW ON ETERNITY

We are posting the speech by Professor Edward O. Wilson at the Opening of Laboratory of Biodiversity of Gorongosa in deep respect for Greg Carr, the Mozambiquen Government and the whole team of people working to protect Gorongosa National Park. The long-term, holistic approach taken by the Gorongosa Team working to restore an amazingly biodiverse ecosystem is admireable from many perspectives - and provides a model for other priceless habitats and species. What we will learn from Gorongosa may have an impact far and beyond, well symbolised through the Laboratory of Biodiversity just opened.

We, admittedly, wish we were in Gorongosa for this milestone - and we really look forward to continue our elephant work there later in the year. We are proud to be part of the Gorongosa Team.

A WINDOW ON ETERNITY

The development of these wonderful facilities, along with the earlier inclusion of Gorongosa Mountain into the park and the rebuilding of the megafauna back to its pre-war strength, has been made a reality by Greg Carr and the government of Mozambique. It represents an advance not only in this country and Africa but the entire global environmental movement. 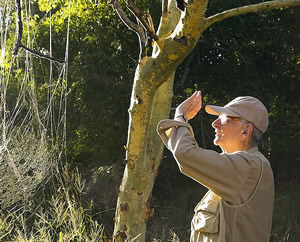 In essence, what it has achieved is to give a broader role in the global movement to the world’s nature parks and other natural history reserves. This development will help bring life back to humanity’s environmental conscience. Why do I put it this way? The world is becoming green. Environmental awareness has grown dramatically during the past several decades. However, the focus has fallen increasingly on the non-living part of the world, in other words on climate change, pollution, and the exhaustion of irreplaceable resources. At the same time attention has slipped away from the living part of Earth, called the biosphere, a layer of living organisms so thin it cannot be seen from the side by an orbiting space vehicle in orbit. The biosphere still has plenty of biomass, in other words the sheer weight of living tissue. Most of it is in the farms and timberlands that sustain the human species. What is declining is biodiversity, the variation of living organisms. Biodiversity exists at three levels: first, the ecosystems such as the lakes, streams, savanna, and dry forests of the Rift Valley and Cheringoma Plateau; then the species of plants, animals, and microorganisms that make up the ecosystems; and finally the genes that prescribe the traits that distinguish the species that make up the ecosystems. National Parks like Gorongosa play a major role in preserving the world’s biodiversity, and now, increasingly, by learning how to save it everywhere around the world.

How much biodiversity exists? To date two million species of plants, animals, and microorganisms have been discovered and given descriptions and formal names by biologists. Estimates, however, place the actual number at closer to ten million. When bacteria and other microbes are added, the number will soar much higher. Humanity, to put the matter as simply as possible, lives on a little known planet. We lack a sound idea of what our activities are doing to it.

This brings me to another important point relevant to this park. Gorongosa is so far, I believe, the only park in Africa, and one of only several in the entire world, to undertake a complete study to discover and identify all of the species of plants, animals, and microbes that make up its biodiversity—not just the mammals, birds, reptiles, amphibians, and fishes, and vegetation, but all of the insects, spiders, and other invertebrates as well. This project, led by Piotr Naskrecki, and utilizing the expertise of Marc Stalmans, has already turned up many new species, especially of insects. As it expands, the number of animal and plant species is bound to increase dramatically. As a comparison, consider the Great Smoky Mountains National Park in the United States, where a similar effort has brought to light approximately 18,000 species.

We should learn as much as we can about these smaller creatures that I like to call “the little things that run the world.” Elephants, lions, and other mammals of course play vital roles in the ecology of Gorongosa, but they live upon a living platform of other, usually neglected plants and animals. I strongly believe that we should extend the term “wildlife” to cover all of the animals, large and small, that make up the ecosystems.

There is so much to learn for scientists and amateur naturalists at Gorongosa National Park of ecology, physiology, and other aspects of biology, and the physical environment of the park as well. This is an ideal place to pioneer the concept of nature parks throughout the world as centers for research and education. The center will be an asset not just for visitors but increasingly in time, of great value to the people of Mozambique. I’m proud to be a part of it, and I congratulate those who have created the center and now are set to make it an example for the rest of the world to follow.