ElephantVoices in collaborative effort to ban elephants from circuses in Brazil

On August 25 last year ElephantVoices' Joyce Poole and Petter Granli participated in a videoconference with Ricardo Tripoli - a Representative in the Congress of Brazil. Tripoli is actively working to promote Bill 7291/2006, which would ban the use of animals in circuses throughout Brazil. Viviane Benini Cabral, Fauna Projects Legal Coordinator for the Office of the Representative, and Junia Machado, ElephantVoices' representative in Brazil, also participated. 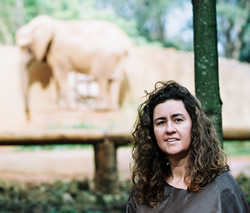 The objective of this meeting was to create an alliance between the organization and Representative Tripoli to help approve the Bill. ElephantVoices, mainly through Junia Machado, and Tripoli continue to discuss this important initiative.

It is estimated that there are between 35 and 40 elephants in Brazil, 23 of them in zoos (519.25 kB) and the rest in circuses. There are pictures, videos and reports on some of these circuses, and the elephants are living under terrible conditions. As some Brazilian municipalities and states have already banned the use of animals in circuses, some of these animals are being rented out to circuses in other Latin American countries. Such transport over long distance only exacerbates their suffering. You can read some more about the situation for elephants in Brazil in a previous news piece here on ElephantVoices.

If Bill 7291/2006 is approved, Brazilian circuses will have eight years to give up these animals, either sending them to zoos, sanctuaries/reserves or releasing them into their natural habitat, if that is appropriate. Most zoos in Brazil offer conditions for elephants, at least, that are far from satisfactory. We are, therefore, discussing the need to develop a place(s) to rehabilitate these elephants. Such a "sanctuary", if you will, must have enough space for these abused elephants to roam freely, have a semblance of autonomy and be allowed to interact and form natural social groups.

The situation for elephants worldwide was also discussed during the videoconference, including their geographical distribution, the estimated number of elephants in captivity, poaching of elephants for ivory and the issue of sport hunting in some African countries.

"Animals in captivity are in a situation very similar to that of someone imprisoned for life. In the circuses, they go from the pen to the circus where they perform, and again back to the pens. For them, it is a sentence of life imprisonment", stated representative Tripoli. "We will certainly become much stronger with the support of ElephantVoices, obtaining a favorable vote in the Brazilian Congress. Together, we will achieve much more".

A ban important step for elephants - and Brazil

ElephantVoices will give full support to Representative Ricardo Tripoli in pursuing the welfare of elephants in Brazil, providing articles, scientific documents and information on their behavior, their needs and all the issues related to their confinement and use in circus spectacles. By providing this support, ElephantVoices hopes to make a contribution toward this very important step for the country and its elephants.

The environmental representative had a decisive role in the discussions about this Bill and was the head of a task force made up by the organized civil society. The Bill was approved by the Environment and Sustainable Development Committee and also by the Education and Culture Committee. He was also the leader in this Committee of a group defending animals, presenting a petition with more than 100.000 signatures in favor of this Bill approval. When the Bill was in the Constitution and Justice Committee, Tripoli was the spokesperson and stressed in his report the cruelty associated with the use of animals in circuses. The report was approved without amendments. He also made a request to include this project in the agenda and believes that the Bill will be voted in 2011. "This victory in the animal protection movement is the victory of life," stresses Tripoli.

The Representative states that the next step to take is related to people that have farms and want to keep wild animals, as "private zoos".