Forcibly taking an infant belonging to another family away from its mother. Elephants may use their trunks, tusks and forefeet to Pull, Lift, Tusk and Shepherd the infant away from its mother and family. Kidnapping events are rare and seem to result from a combination of both attraction toward the infant and aggression toward the family. Kidnapping of infants by adolescent females from other families appears to be driven by a strong allomothering instinct. Conversely aggression directed by older females toward infants from other families or clans is likely a way of exerting dominance. Calves are rarely injured. We have observed both types. Kidnappings by adult females are associated with powerful Rumbling, Roaring and Trumpeting and the formation of Coalitions as adult females in the family struggle to Retrieve the infant from the abductors and they work to keep it.

On this day we were with the QB family in which Qoral, the matriarch, had a newborn and Qadija was in estrus. Early on two families were together and there was a lot of commotion. We got some footage of what we believe was an attempted Kidnapping, but, admittedly, there were so many elephants and so much going on in the long grass that at the time we were filming we were confused what was happening.

There was most definitely an altercation between two females that ultimately involved the formation of coalitions on both sides. This edited video is our best attempt to show the drama that can unfold in such a situation.

As the clip starts we see two adult females Run-Away. A male is involved but we think more likely that this was the start of the trouble: that one female Ran-After another and this was part of the fallout. Someone Roars. Elephants in the foreground rush to get out of the way and a calf gives a Baroo-Rumble and is comforted. The real drama unfolds in the background where the matriarch of the QB family, Qoral, is walking away with her infant, but turns to seriously threaten another large adult female from a different family, on the left. A male appears to intervene, literally Pushing this second female back. But she returns and we see her threatening Qoral Head-High and Qoral Backing-Away. This second female, with a broken right tusk gives a Trumpet-Blast as she rushes toward Qoral who has retreated behind other elephants.

Meanwhile members of Qoral's family are coalescing in the foreground and we see tuskless Qalinda running toward some calves/juveniles and another female running in from the right Rumbling and Trumpeting, Tail-Raising, Urinating. When we finally realize what is going on, Coalitions form around the two warring females, Qoral on the right with her reinforcements and the female with the broken right tusk on the left with hers. (Amboseli, Kenya) 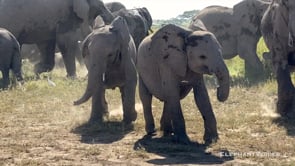