An adult female acting as if she is in estrus, or simulating estrus, in the presence of her first time estrous daughter or granddaughter. While not in estrus, the female adopts estrous behaviors in the presence of males, such as Wariness and the Estrous-Walk, and Runs-Away from them together with her young estrous relative, typically leading her.

This is a very long clip of a mother Simulating-Estrus in the presence of her first-time estrous daughter. The mother is not in estrus. The mother has been circled at intervals throughout the clip so as to help the viewer focus on the correct individual. We arrived to see two large males in musth looking for an estrous female and heard an Estrous-Roar. Musth male Paolo (with a flop ear) went in search of her. Suddenly from behind the palms a mother comes running as if in estrus (Chin-Up, Retreating-From, Ears-Stiff), followed by her young daughter who is Chased by a teenage male. They try to outrun him but he Mates her (out of sight). Paolo catches up with them and immediately the mother acts as if in estrous again and Retreats-From, Chin-Up, Ears-Stiff with daughter following her and Paolo and other males following the estrous female. Though the mother keeps her distance from the males, even Running-Away Tail-Raising, the daughter is seemingly naive and does not keep up with her mother and is caught by a second male who Mounts her. Luckily Paolo catches up and the male dismounts.

Throughout this sequence of clips it is the mother who is acting most demonstrably as if she is in estrus, yet it is the daughter who is of interest to the males. This behavior has been observed many times by mothers of first time estrous daughters. (Amboseli, Kenya) 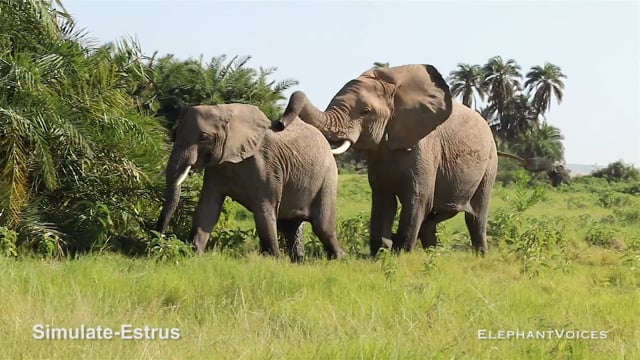