An aggressor lowers the head by bowing the neck downward and simultaneously tilting the head upward so that the tusks are approximately horizontal and Charges. The Bow-Neck-Charge may be associated with Ear-Slapping and/or Ear-Folding. This posture is typically held at a fast walk or, in this case, during a Charge, especially when the receiver of the charge is of smaller stature than the aggressor. In a sense the aggressor brings head/tusks down to the victim's level. It is one of the more common forms of high-level aggression between females of different families or toward young, pesky non-family males and may be seen as a component of a Coalition. It may also be directed at non-elephant threats. It is adopted primarily by adult females in Aggressive or Mobbing & Attacking contexts and by elephants of all age/sex groups in Social Play contexts. It is reminiscent of the ‘Forward Threat Display’ of geese.

The AA are walking along the edge of Enkongo Narok Swamp to where they plan to make a crossing. As they stop at the bank one of the allomothers who has been helping Angelina look after her infant twins spots a fish eagle on the ground. Perhaps to defend the twins she chases it away with a Bow-Neck-Charge. (Amboseli, Kenya) 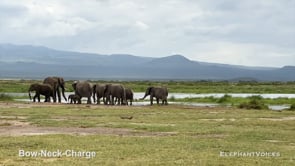