An elephant Standing or moving with head held well above shoulders, and, with Chin-Up and Eyes-Open looking down at her adversary over the tusks with ears maximally forward (Ear-Spreading). Standing-Tall the elephant appears to increase in size and sometimes will deliberately stand upon an object such as a log or anthill (Attain-Higher-Ground) in order to increase its height.

Elephants normally stand or move about with their eyes cast down - a direct gaze with Eyes-Open is a component of many displays. This posture is often used toward non-elephant threats, such as predators and people, as in ‘I’ve got you in my sights, so watch it.’

All age/sex groups will engage in Standing-Tall.

This is an excerpt from an Escalated Contest between two males that lasted close to three hours. At this stage they have already engaged in 3 bouts of Dueling. During this particular clip the aggressor - the male on the right Advances-Toward the male on the left and there is a stand-off, neither one willing to fully take on the other. The broken tusked male is the more aggressive, but the male on the left looks slightly larger and stands in an expectant posture with his Chin-Out. His Chin-Out posture then changes to a Stand-Tall. When he takes two steps toward the broken-tusked male, the broken-tusked male Backs-Away and Head-Shakes. (Amboseli, Kenya) 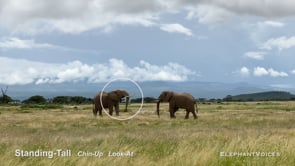