Among families, (typically) an adult female, who places herself on the edge of her family, between them and a perceived threat - such as a human observer - and remains attentive and engaged in Vigilant behavior, monitoring that threat. The elephant may engage in Displacement-Behaviour, half-heartedly plucking at vegetation or dusting, for example, but any movement or sound from the perceived threat results in increased vigilance and a variety of intention movements that indicate an aggressive action could follow. Musth males also Stand-Guard, monitoring the movements of rivals or human observers and taking aggressive action with any perceived transgression.

An aggressive elephant may Stand-Guard over a vehicle for what can seem like an interminable length of time!

The C family have already engaged in a Group-Advance on us that was initiated by Corajosa, gf0054. The C family did not follow through and have stopped their advance some distance away. Some of the members have gone back to feeding, but Bullet, gf0032, has not. She is standing closest to us (of the family) and is Standing-Guard - acting vigilant - Listening with Ears-Stiff and Head-Swinging. (Gorongosa, Mozambique) 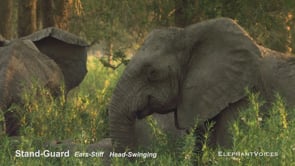