An aggressor lowers the head by bowing the neck downward and simultaneously tilting the head upward so that the tusks are approximately horizontal and Advances-Toward a rival or other threat. The Bow-Neck-Advance-Toward may be associated with Ear-Slapping and/or Ear-Folding. This posture is typically held at a fast walk and is used especially when the receiver is of smaller stature than the aggressor. In a sense the aggressor brings head/tusks down to the victim's level. It is one of the more common forms of high-level aggression between females of different families or toward young, pesky non-family males and may be seen as a component of a Coalition. It may also be directed at non-elephant threats. It is adopted primarily by adult females in Aggressive or Mobbing & Attacking contexts and by elephants of all age/sex groups in Social Play contexts. It is reminiscent of the “Forward Threat Display” of geese. 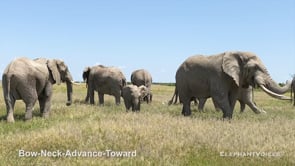