Directing aggression toward an object or individual that is irrelevant to the current situation. When the tendency to attack is thwarted, for some reason (e.g. fear of opponent), the individual may redirect his/her aggression to some other animal or object, such as vegetation. This may involve trashing bushes, trees or throwing sticks, grass, or threatening or attacking other, lesser elephants or smaller animals, or humans in the vicinity.

t is hard to see what happens, but we hear a young male Roar and then Valente, of the Mabenzi family, Advances-Toward him while Ear-Folding; he Runs-Away. After seeing off the young male Valente turns her sights on us. The entire family follows her lead and they begin a Group-Advance on us in an act of Redirected-Aggression. (Gorongosa, Mozambique) 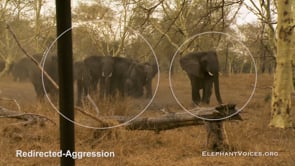