An exuberant display of behavior involving a constellation of vocal, chemical, tactile and visual communication that may occur, for example, during a greeting, birth, mating, kidnapping, rescue, arrival of a musth male, a coalition, or when a group of elephants have successfully routed an adversary. The term Bonding-Ceremony is a general term that includes more specific behavioral constellations such as Coalition, End-Zone-Dance, High-Fiving, Female-Chorus, Greeting-Ceremony, Mating Pandemonium. The behaviors appear to function to reinforce bonds and pull family and bond group members together for collective action.

An adult female and two tuskless calves, one about four and the other about 6 are feeding on grass. As we drive up we are unaware that another four year old - the son of the female on the left is separated from the family about 50 meters away and it is probably concern about him that stimulates their response. They react to us in a dramatic fashion, initiated by the larger tuskless juvenile female who Rumble-Roars twice. The other tuskless calf seems to Rumble-Roar, too. The mother on the left Head-Shakes and Trumpets and the other adult female comes running over to help, also Trumpeting. These are what we would call Social-Trumpets. They Bunch and the two mothers Stand-Tall, Rumbling and Reach-Touch one another and continue to Rumble. The female on the right Trumpets again. The older tuskless reaches Trunk-to-Mouth to the littler one. They Listen. The mother on the right reaches Trunk-to-Mouth to her tuskless calf. The older tuskless touches the younger again, too. They begin feeding again, but continue Rumbling. We move the car and the female who is missing her male calf Rumbles and then Listens as we stop. Her male calf suddenly comes into frame - we have been hearing him give Separated-Rumbles. He walks to his mother and begins Suckling and then they all move off. The initial behavior and vocalizations are what we call the catch-all term 'Bonding-Ceremony'. (Amboseli, Kenya) 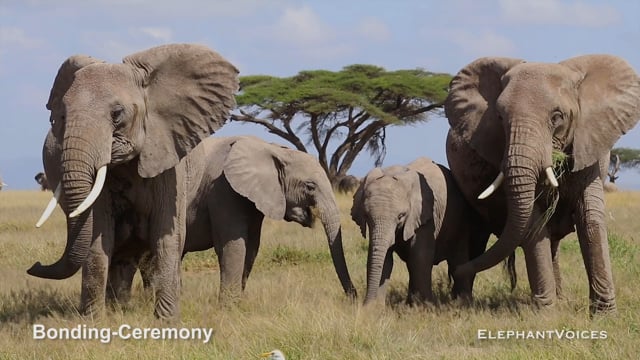