Using the trunk, tusks or feet to play with an object. The elephant may engage with man-made objects (such as paper, plastic, cushion, flip-flop, film-canister, an old sack) as well with a palm-frond, swamp vegetation, a clump of grass or a stick. The individual may pick up the object, pierce it on a tusk, mouth it, bite it, step on it, roll it under a foot, or wave it from side to side, or up and down. The elephant may place it, or throw it, onto its own head or back, or toss it somewhere on the ground, often behind, and focus attention on it in quiet Contemplation - only to retrieve it and begin to play with it once more.

Object-Play may go on for 10-20 minutes or longer. Similar behavior may be seen by elephants in reaction to the bones of elephants: they may pick them up, mouth them, bite them, step on them, roll them under a foot, wave them about and toss them.

All age/sex groups may engage in Object-Play although it is more common among younger individuals.

Provocadora's 7-8 year old female offspring appears to place something in her mouth and then suck on it and her trunk and then extract it from her mouth and begin playing with it - swinging it around in her trunk. The light is not good, but close examination reveals something that could be a piece of wire or a vine or branchlet. (Gorongosa, Mozambique)

Walli’s 5 year old male has something in his mouth. He takes it out and plays with it in his trunk, rolling is up and down against the underside of his trunk, and then puts trunk in mouth and Trunk-Sucks. Meanwhile he is balancing the stuff he had in his mouth in the “hammock” of his trunk - purposefully and then goes back to retrieve it - then he goes out of frame. Seems he is practicing! (Maasai Mara, Kenya)

Juvenile female about 6 years old plays with a stick before eating it. Note the playful swinging of foot and head - general loose and floppy movements typical of play. (Maasai Mara, Kenya)

A six year old female is walking along with her group holding onto a piece of bright yellow plastic that she is attempting to stab with her tusk and put in her mouth. She drops it and then either she or another calf picks it up again. We hear the filmmakers discussing it. (Maasai Mara, Kenya)

V-Notch is standing in the shade of a tree resting with her family. She is playing with a stick. She has it wedged under her trunk and on top of her tusks. Then she removed it and mouths it and then drops it. She picks it up and again wedges it under her trunk but on top of her tusks. She lets it sit there and then removes it only to put it back again. She takes it out again and again replaces it. She swings her curved trunk forward and backward as if she likes the unusual feeling of it sitting there. Again a 4th time she removes and replaces the stick, and a 5th. The she Head-Waggles and puts it into her mouth. Finally she removes it and places it on her head - it drops to the ground. (Maasai Mara, Kenya)

Walli's 5 year old male has something in his mouth. He takes it out and plays with it in his trunk, placing it part way up the underside of his trunk and allowing it to roll down like a marble - 4 times. Then he puts his trunk back in his mouth and Trunk-Sucks. But meanwhile he is balancing the ''marble'' in the “hammock” of his trunk and swinging this ''hammock'' back and forth - purposefully - as if seeing whether he can balance it in there. He pulls his trunk from his mouth - while retaining the marble in place and then puts his trunk back in his mouth and Trunk-Sucks a bit more before taking his trunk out of his mouth and retrieving the object. He carefully holds the object at the end of his trunk, swinging it around a bit. He blows air through his trunk and we see bits of vegetation fly away - and only then do we realise that his "marble" is some sort of piece of vegetation. He rolls it up and down the underside of his trunk again and then we lose sight of him. (Maasai Mara, Kenya)

Young male who is in musth charged wildebeast, scared filmmakers Bob and Gina then stands there in contemplation in a Casual-Stance, then he gets a full erection and goes over to some rocks and dislodges one making a loud noise and then digs a bit. What is this all about? Just feeling his oats? (Maasai Mara, Kenya)

As an adult female begins to doze she plays with a grass stolon, holding it in her trunk and swinging it back and forth. (Amboseli, Kenya)

A family is Mud-Splashing. While splashing an adult female finds a stick in the water hole. She picks it up and begins to play with it. We have circles all of the times she touches the stick, but she essentially plays with it for close to 3 minutes before leaving it behind. At one point she seems to use it to scratch the side of her face. (Amboseli, Kenya)

Pascal has just Mated with Amparo and is still Resting. He picks up a rock in her trunk and swings it to the left and then back to where he picked it up. The camera then focuses on another elephant and we don't know what he did with it next. (Amboseli, Kenya)

This young male is in a group with an estrous female who is being Guarded by Pascal. For 10-15 minutes he stood on his own Resting and Waiting but also engaged in unusual and very concentrated Object-Play in deep Contemplation. We noticed what he was doing after some time and filmed him for 8 minutes. The audio is very poor, but you may be able to hear our commentary.

We have chosen to include almost 6 minutes of this behavior because we found it so unusual. We noticed that he was playing with a small stick alternating between holding it in his mouth, stashing it in an armpit, holding in the 'hammock' of his trunk and touching his chest with it. While scratching the body with sticks is not unusual he bit his stick into smaller sections and then rather than scratching with it was placing it between a nipple or a point on his chest and his leg - making sure that the ends touched the two points - back and forth from one side to the other - as if he was 'measuring' the distance, feeling the good feelings, or something.

This is a huge file and 'slow TV' so only watch it if you want to reflect on why an elephant might engage in such behavior. (Amboseli, Kenya)

A young male enters a deep pool, and Splashes-with-Trunk. He finds a small stick in the mud and holds it tight against the end of his tusk with his trunk before collapsing into the water and Submerging. (Amboseli, Kenya)

A juvenile female finds a large stick and brandishes it over her head. An adult female approaches and Supplants her and begins playing with the same stick. (Amboseli, Kenya)

Two young males come over to visit us. In all they spent 9 minutes within two meters of our car. In this video one of the males picks up a stone and puts it in his mouth and then drops it. He comes closer and stands next to us. He reaches for another stone and puts that in his mouth. We can hear the sound of it clunking against his teeth. Then he drops it. Then he picks it up again and drops it closer to his feet. He steps on it and rolls it under his foot. He seems to consider it for a while and then steps back, picks it up and again places it close to his feet. (Amboseli, Kenya) 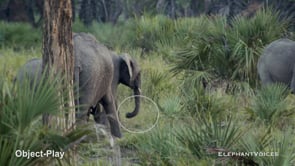 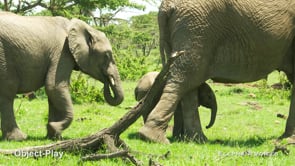 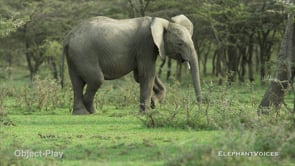 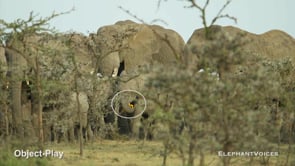 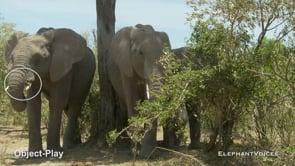 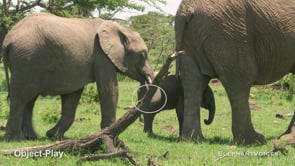 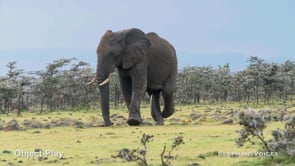 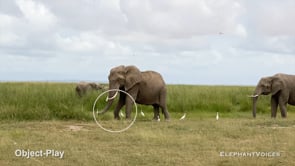 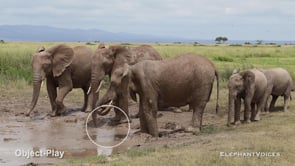 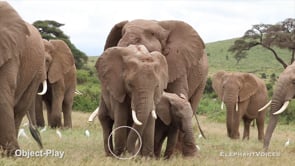 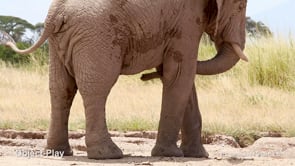 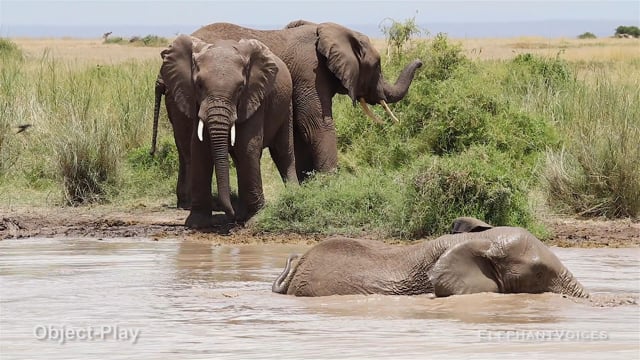 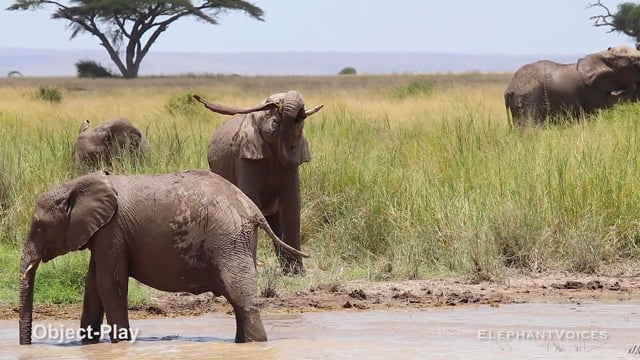 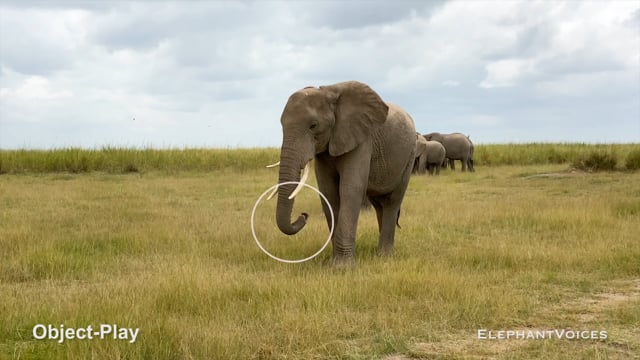