Provocadora, gf0012, is walking when she seems to detect our presence. (Clip in slo-mo) She stops, turns to face us, Ear-Spreading and then Freezing. She draws herself up to full height, Chin-Up, Listening, before lowering her head and continuing on. (Gorongosa, Mozambique)

After much contemplation Corajosa, gf0054, Head-Shakes and Advance-Toward us and then Stand-Tall facing us and considering us - She Freezes - Ear-Spreading, Ears-Stiff, Head-Swinging - Listening. She then turns and walks away Initiating-Movement. She is followed by Bullet, gf0032 and gf0152 and 6 calves. They walk about 30 paces and then Freeze and Listen, Ears-Stiff. They stand for some time and then take another 10 paces before Corojosa Freezes again, Listening after she Back-Toward Bullet. All Freeze, Ears-Stiff, Corojosa with Open-Mouth. Finally, gf0152 Initiate-Movement and they leave. (Gorongosa, Mozambique)

The V family has been monitoring our presence for some time. This is the day Vigilante, gf0064, got her name as she has been extremely vigilant. As this clip begins the entire family is Listening and Freezing. They want to depart. In part they are Listening for any sound from us and in part they are Waiting for their matriarch, Valda, gf0068, to decide it is time to go, but she is still Listening for us. The camera pans across the group from right to left, all Freezing and Listening, to where Valda stands Listening. Finally she turns to face the direction of her Waiting family and as she begins to move (Movement-Initiation) everyone moves in unison. (Gorongosa, Mozambique)

Matriarch Nalakite (tuskless female), her family and associating males are walking up an incline through Faidherbia woodland. Nalakite takes up the rear position in the group. We hear the sound of cattle bells meaning that Maasai and their livestock are in close proximity. Nalakite exhibits Tail-Raising and then Freezes and lifts her head and cocks her ears in a Listening posture. She turns her head from side to side - Head-Swinging - as if trying to localize a sound. We hear the alarm calls of guinea fowl and wildebeest. (Maasai Mara, Kenya)

gf0034 of the F family stands Listening, her Ears-Stiff, Head-Swinging and her trunk catching the wind in a J-Trunk position. (Gorongosa, Mozambique)

Rui stands Listening his Ears-Stiff and his trunk in a J-Trunk position. Then he Advances-Toward us and climbs on a termite mound and Stands-Tall on that. Notice how he does a slight Head-Dip before going up on the mound. (Gorongosa, Mozambique)

Berta, Gf0009, matriarch of the B family, is in a group with Emilia, gf0161, and others. Berta is Listening - Ears-Stiff and Head-Swinging. She has a newborn on her left side and a 4.5 year old calf on her right - out of view. The older calf comes around to our side and Solicit-Suckling x 2 but fails due to Berta's concern about us. The calf goes back to other side. (Gorongosa, Mozambique)

Qasima and part of her family are by the KH4 water hole when a vehicle (off road photographer) departs. Because this vehicle is off-road and she is not used to them being there, she is suspicious. She Listens to the vehicle depart and follows where it is going by Head-Swinging (to help localize the sound). She also uses Periscope-Trunk, drawing attention to potential danger, and then departs followed by her calves. Other members of the family pay attention to her, are alert and use J-Trunk - note that even the female who is turned away is alerted - perhaps by Qasima's silence. We did not hear any Rumble. (Amboseli, Kenya) 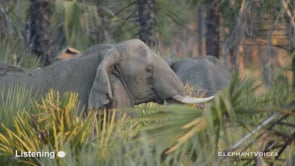 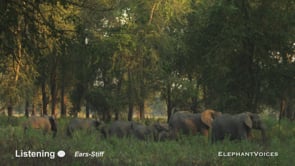 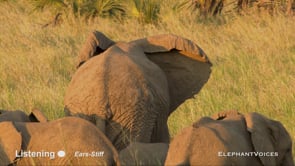 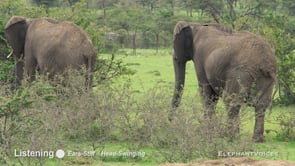 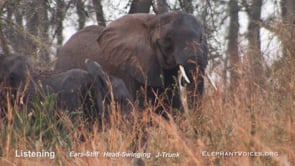 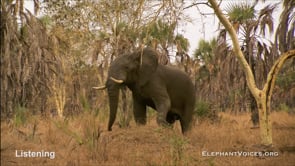 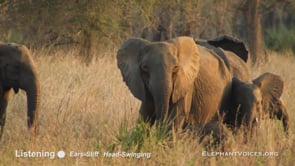 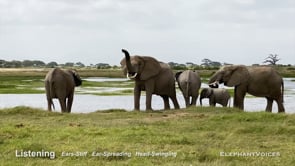