Viajante is acting as if he is in musth. He walks away from mud-splashing Trunk-Dragging. Then, as this clip begins he looks to be Tracking. Then stops momentarily to Listen, standing with a J-Trunk. (Gorongosa, Mozambique)

In Slo-Mo: gm0025 looks to be in musth - he is feeding with Ears-Stiff and then stops moving to Listen and then appears to go toward what he heard. (Gorongosa, Mozambique)

A young mother is walking alone with her day old infant. She stops as if resting and then we see her raise and turn her head and spread and stiffen her ears, Listening. Immediately after her Ear-Flapping and Mouth-Opening indicates she is calling and likely giving an answering Contact-Rumble. Then she Listens again. We believe we hear a distant rumble in response to her. She pauses Listening and then gives a second softer rumble. She is separated from her family and her infant is vulnerable to predators without them. We believe she is looking for her family. (Maasai Mara, Kenya)

Ruby is walking with her calf. She stops still, cocks her ears and Listens. As she stands Listening we can see her Eye-Blinking and J-Sniffing. (Maasai Mara, Kenya)

A group of elephants is foraging on Faidherbia drepanolobium when one of a couple of elephants out of view rumble - at least two overlapping calls, followed by a more powerful rumble, which could be a contact-call. The female in view stops feeding, raises her head and Listens after as if waiting for an answer. She also turns her head - Head-Swinging - as if trying to localize a sound, and she briefly exhibits J-Trunk . Note that other members of the group stop feeding, too, all Freezing and Listening. The guinea-fowl are alarming, which might indicate a predator or other disturbance - in which case this would be a Vigilance context. (Maasai Mara, Kenya)

Nalakite f0736 is feeding when an elephant out of view gives a loud rumble that sounds and looks like a Contact-Rumble. Nalakite stops feeding turns and slightly raises her head and Listens attentively. Then she walks a few steps, chews 5-6 times, puts another trunkful of food in her mouth and then holds stock-still to Listen again. She exhibits Eye-Blinking. The first rumble could have been a contact-call and perhaps Nalakite's second Listening was in response to a distant contact-answer that we can't hear. (Maasai Mara, Kenya)

Big Mama stands on the edge of her family, stock-still, ears cocked Listening. There is a loud plane flying over so it is not possible to know what else she might be listening to. (Maasai Mara, Kenya)

Rui is in musth and Mud-Splashing. He pauses in his splashing to Listen - Freezing and with Ears-Stiff and his trunk held in a J-Trunk position. After the second bout of Listening he Ear-Folds and gives a short and barely audible Musth-Rumble. He turns and gives a little Musth-Rumble again. As he leaves the mud-wallow he pauses to Listen with Ears-Stiff. This behavior - Mud-Splashing associated with Ear-Folding, Musth-Rumbling and Listening is typical musth male behavior. (Gorongosa, Mozambique)

The C family is walking along when they hear something. Bullet-Hole, gf0032, stops. She Listens with Ears-Stiff and displays slight Head-Swinging before she lightly Ear-Flaps, indicating that she may be Rumbling. Corajosa, gf0054, walks up next to her and Listens, also with Ears-Stiff and displaying slight Head-Swinging. Her mouth appears slightly open as if she, too, may be calling. There is no audio for this clip so we can't be sure. (Gorongosa, Mozambique)

Rui is in musth and is Tracking and Mud-Splashing. He pauses in his Tracking and splashing to Listen. His stops Tracking Freezing and with Ears-Stiff and Foot-Swinging. Then he stops splashing Freezinf, Ears-Stiff his trunk held in a J-Trunk position. After the second bout of Listening he Ear-Folds and gives a short and barely audible Musth-Rumble. He turns and gives a little Musth-Rumble again. As he leaves the mud-wallow he pauses to Listen with Ears-Stiff. And again faces us Listening and Head-Swinging. 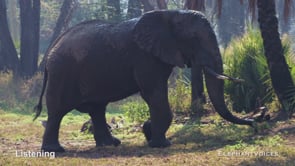 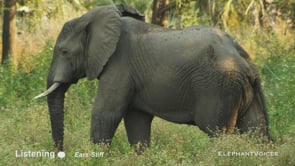 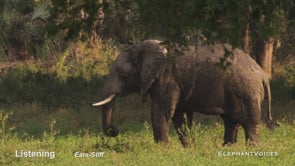 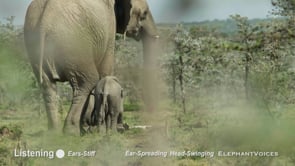 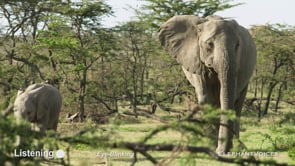 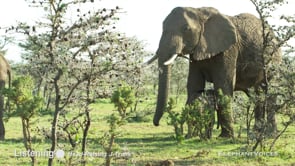 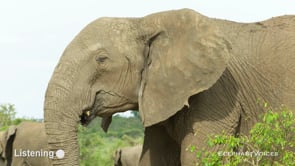 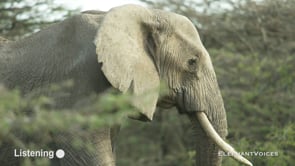 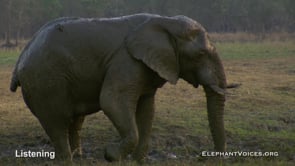 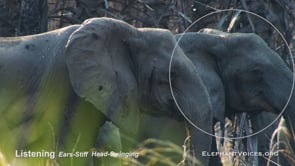 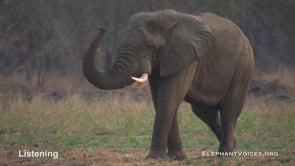