An elephant Digging around, Lifting, Pushing or Pulling another elephant to assist it to stand, get up a bank, out of a river or mud-wallow or otherwise help it to overcome some physical predicament. Also observed when an elephant is incapacitated, dying or dead. All age/sex groups, except infants, may be observed attempting to Help other elephants, but this behavior is most successful among older, stronger elephants and most common among adult, adolescent and juvenile females during their care of calves.

Little E is 15 days old. He Scrapes-Ground with his forefeet. He seems to want to lie down. He eventually does so, but ends up rolling down hill into a ditch ending up on his back. His mother immediately uses her trunk to Pull him up on his feet and then touches his Trunk-to-Genitals. Lorato is hovering around to help and also touches him. This is after his mother slipped on the rocks and landed on him. What a dangerous place... (Maasai Mara, Kenya)

Little E is 3 days old and lies down to go to sleep with his head resting awkwardly on a log. His mother comes over and touches him, seeming to check whether he is OK. Allomother Lorato appears to think he is not comfortable and walks over smartly and begins to try to fix things.

Little E is 3 days old and has been sleeping resting his head on a log. His mother and allomother Lorato have also been Resting. Now it is time to depart and Lorato and Mama Little E wake up and Help Little E to his feet using their trunks and feet to Lift him. (Maasai Mara, Kenya)

Marshmallow has a newborn. She is in the company of two allomothers and a young male. Marshmallow wants to depart and positions herself to Lift her newborn. She uses her right forefoot to Lift and then includes her trunk to stabilize and support the Lifting maneuver. The infant is woken to a half sitting position. Marshmallow repositions herself and uses her left forefoot to Lift the infant to a standing position. (Amboseli, Kenya)

Note: In this long clip circles have been added to show the location of the male twin or specific Helping - Lifting, Pulling, Digging - behaviors by Angelina or the two allomothers, Arora B and Amora. Angelina has twins a couple of days old. The rest of the family has crossed Enkongo Narok Swamp. Angelina rejected three different crossing points and chose this one. As they are crossing Arora B (a 10 year old female with skewed tusks who is Angelina's sister and aunt to the twins) comes from the other side to help and we see just how deep and sticky the mud is. As they are trying to cross the male twin gets stuck. Amora, Angelina's 9 year old daughter, notices and tries to help him. We can hear soft Husky-Cris from him in distress. Angelina becomes aware that there is a problem and goes to Help first Lifting and then Pulling the infant toward her. We see first its head and then its tail in the melee. Meanwhile, the female twin is trying to follow her mother and is climbing up the bank where the male twin is stuck. There are several Alarmed-Trumpets as the allomothers, Arora B and Amora and other younger juvenile females panic. There is some Ear-Folding and Pushing as the helpers seem to disagree how to Help and are crowding around the infant. Another adult female, Ambra (half-tail), who is also Angelina's younger sister, arrives to help.

The female twin is struggling to climb the bank and gives two Husky-Cries. Angelina turns and Pulls her down off the bank with a splash and leads her away from trouble. The others continue to give Alarm-Trumpets while Angelina escorts the female twin out of the muddy stream. Angelina succeeded in moving the male twin out of the deepest part of the mud, but not far enough and we see him briefly upside-down, his legs in the air, before Amora appears to climb on top of him in her attempt to Help. There is more Alarm-Trumpeting and then a bit of calm as most begin Drinking. All except Arora B and Amora then begin to leave the stream. The two discover that the male twin is still stuck and they give more Alarmed-Trumpets and begin Digging in the mud with their tusks. The older allomother, Arora B, Tusks Amora out of the way, as if she is not satisfied with her Helping technique. Again Arora B Ear-Folds and Tusks her and then takes her position.

The two allomothers separate a bit and we catch a glimpse of the male twin - head Submerged and a brief kick with a leg and then he appears to be limp. You can hear Joyce let out a despairing sigh. Arora B Pirouettes and both carry their ears high in alarm as they face the infant. Arora B uses her foot to try to Lift the infant but ends up flipping him instead. Joyce sound as though she is hyperventilating as the infant seems close to death.

As the two girls appear to flail about trying their best, but not really having the experience to know how to solve the problem, in the car we are close to despair. Their Digging has dislodged the infant who seems to be close to limp. As he floats past them Arora B she can be seen trying to lift him by a leg and we see his trunk momentarily. As the infant continues to float down the stream we see Amora bend down, face almost underwater and grasp the infant's and Lift him up. She tries twice but doesn't seem to get a grip. Then, Arora B steps forward. She bends down and this time grasps a foreleg, Lifting him up again. But neither one seems to have the strength or skill to complete the task. Then they stand facing downstream, Arora B with the infant at her forelegs where she Lifts the infant's trunk up out of the water 5 times as if she understand that it must have it up to breathe.

Finally, with the infant free of mud and upright in the water, Arora B and Amora Shepherd him to a safe place where Angelina and the others are Waiting. Abra helps them get the infant up the muddy bank and we can see Amora using her head and trunk to Lift and Push him up. As they try to get him up the muddy bank there is another Alarm-Trumpet by Arora B.

The entire saga lasted 9 minutes but seemed like an eternity. The footage has been shortened. It was very difficult to see what was happening at the time and you can hear in our comments on the clip that we are in despair at Angelina walking off and leaving the twin to the inexperienced allomothers. And, yet, once we studied the footage we are able to see that 1. Under the circumstances Angelina could not take care of both twins at the same time, as helping one put the other in danger. 2. The two allomothers, though lacking in experience, did the right thing and were able to save the infant's life. 3. Crossing the swamp is extremely dangerous. Angelina was aware of this and, before crossing, rejected three other locations. (Amboseli, Kenya)

It is not easy being mother of newborn twins, especially when you are a mother elephant trying to cross a deep swamp to meet family members on the other side. One can question the wisdom of doing so, but this is Angelina's home and crossing Enkong Narok swamp is something she has done since she was an infant. The trouble with twins is that it is not easy to keep track of both at the same time and Angelina is dependent on the allomothers. In the early days of life when the infants are programmed to follow anything big that moves it is critical that their caretakers make sure that the infant follows the correct individuals and not a female from another family or a male.

On this occasion Angelina leads her family into Enkongo Narok swamp together with a medium sized adult male and Angelina doesn't realize for some time that one of her twins has followed him. Males are programmed to reject any infant that follows or tries to Suckle from them and this make evolutionary sense. But on this day this male went completely berserk, Tusking and Lunging and Kicking-Back at the infant as it tried to follow him (this infant is circled whenever we are able to see it). The male Trumpets and Trumpets in Alarm. Angelina decides that being in the deep swamp is not so smart after all and she goes back to the bank, presumably with one twin, though we cannot see it.

Three allomothers try to rescue the wayward twin. Perhaps they alert Angelina because as she reaches the edge of the swamp she stands (circled) with Periscope-Trunk (as do the others) and seems to realize that her other twin is in trouble. She turns and comes back at top speed. We cannot see the twin we presumed was with her.

Meanwhile first Amora and then Arora B (both circled) bravely approach the thrashing male and Arora B manages to get her trunk around the infant, and tries to draw it to her, but the water is so deep, the male so aggressive and the infant so determined to follow him, that there is little she is able to do. Then Angelina arrives and takes over, clashing with the male - tusks on tusks - twice, before managing to secure her infant. It is very difficult to see what is happening, but as the male continues to Trumpet and Thrash violently about, she and her family turn and head back to shore. It is not until they reach the edge of the swamp and clamber up the bank that we discover that the twins have survived this ordeal.

Note that the audio is pretty awful as there was so much wind and three separate recorders running at different times. (Amboseli, Kenya)

A family group has crossed a small river and are Clambering up the other side. Two adult females are already out of the water. One mother turns to Help her calf, but it doesn't seem ready to come out. Then it tries and she attempts to Pull it, but the calf goes back into the water. It tries again, but the mother is feeding. The calf then follows others to try climbing out at another spot. When that doesn't work it comes back with another calf.

Two juvenile females are in the water with the two small calves and they seem to make a halfhearted attempt to Push them out, but their mothers are now both Waiting for them on the bank. As the calves attempt to climb up the bank the mothers reach their Trunks-Toward and around behind them and Pull them up the bank. In addition to Pulling the mothers trunk acts as a stabilizer, preventing the calves from slipping back into the water. (Maasai Mara, Kenya)

A juvenile male and a calf have been playing. We don't see what happens but the calf seems to be stuck on its side. A juvenile female comes Running-Toward the calf and with juvenile female Arora B they try to help the calf to its feet Lifting with the forefoot and trunk and Kicking-Back to Lift with a hindfoot. (Amboseli, Kenya) 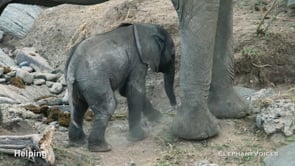 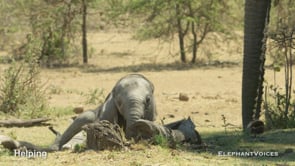 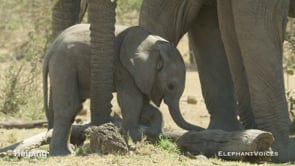 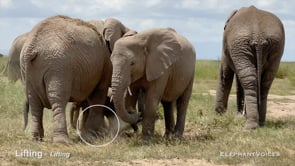 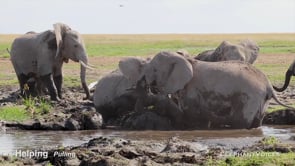 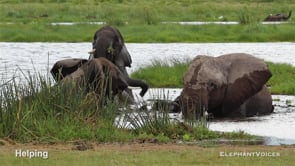 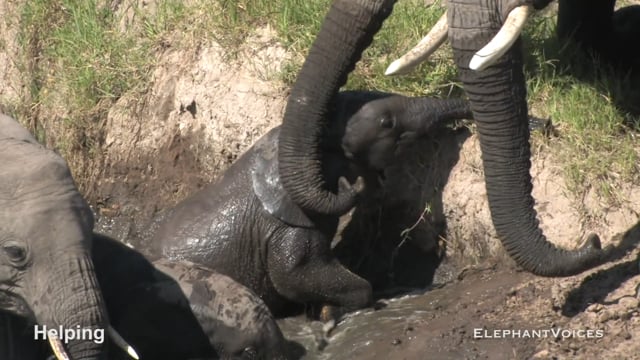 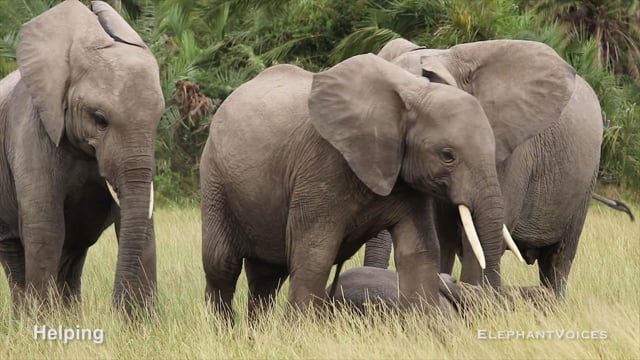