Family group rushing en masse toward an adversary, other elephants, predators or other perceived threat in a highly coordinated manner and with hostile intent. In an Attacking & Mobbing context Group-Advance may be preceded by Freezing, Periscope-Trunk, Bunching, Head-Swinging, Standing-Tall and Reach-Touch and Rumbling.

A Group-Charge is the result of Coalition Building. Initiating individual(s) may rapidly approach their companion(s) coming along side her/them in parallel or face-to-face, they may vocalise in chorus, while High-Fiving - Rapid-Ear-Flapping, sometimes with Tusk-Clicking, Trunk-Twining and engaging in reciprocal Trunk-to-Mouth. Then, in unison, they Group-Charge the affronting individual.

In a Group-Charge against another group of elephants, it is typically an older female, often the matriarch, initiating the coming to aid of a younger family member who may have been kidnapped or attacked.

Tuskless female, Valda, stands Head-Swinging and Foot-Lifting. Then she begins a Perpendicular-Walk, which appears to be a signal for one-tusked Vigilante to Charge. Vigilante Charges, pauses and Charges again and the others join her in a Group-Charge. There are several Trumpet-Blasts. (Gorongosa, Mozambique)

We drive in toward a family that turns out to be gf0073 et al. We were 80 m from them out on the grassland and they were in the forest. I say that they are coming and then Bob turns off car. It is hard to see as Petter is in the way and the camera out of focus, but gf0073 is in the lead followed by a wall of elephants in a Group-Charge. gf0073 Charges toward us and then Stands-Tall and then Head-Dip and Sashays as others arrive giving Trumpet-Blasts.

Bob starts the car. gf0074 also Head-Dips, Touch-Ground and gf0075 does a violent Head-Dip in threat. They Freeze Standing-Tall. Then gf0073 takes two steps back, Head-Swings twice (gf0075 also) and does a slight Head-Dip with a back step. This seems to be a signal to gf0074 to turn. She and calves then retreat. But gf0073 Stand-Tall with a Sashay and gf0075 steps forward with another double Head-Dip so violent that her ears flap violently against her body. This is an obvious threat display. (Gorongosa, Mozambique)

Valente, gf0013, leads a Group-Charge with Ears-Spread throughout. As she Charges, she lowers her head and drags and bounces her trunk along the ground in a Trunk-Bounce-Drag and ends with a Forward-Trunk-Swing. She returns to her family and they Bunch together and vocalize. (Gorongosa, Mozambique)

Mwana Nzo, gf0016, Charges at us at the lead of the Group-Charge - Ears-Spread throughout. Note her Forward-Trunk-Swings at us and her Trunk-Curled-Under. Someone is giving Trumpet-Blasts. (Gorongosa, Mozambique)

As part of a long Group-Charge Marcela, gf0017, takes over the lead position from Mwana Nzo, gf0016. Here she is in full Charge. Notice how she raises her Head-High and lowers it. When her head is lowered she engages in Trunk-Bounce-Drag. She Trumpet-Blasts twice and as we pull away and she slows and Head-Dip-Touch-Ground twice. Her Charge is replaced by Valente, gf0012. (Gorongosa, Mozambique)

The Mabenzi family has been aware of nearby vehicles for some time and have been concerned. There is no audio but we are aware that a vehicle is approaching on the track as we see some of the elephants raise their heads in a Chin-Up posture. As the camera pans out we see matriarch Valente Charge from the right as the vehicle appears on the track. She chases after it while the rest of the family appears to Bunch and then, led by Marcela, join the Charge.

Then we see tuskless Mwana Nzo appear from the right with her tuskless daughter, gf0014, Rapid-Ear-Flapping and clearly vocalizing. She joins Valente near the road and then she and Valente back up Bunching with the others. (Gorongosa, Mozambique) 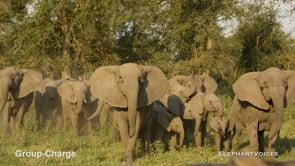 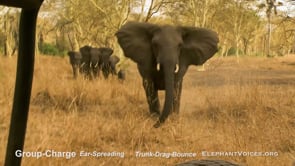 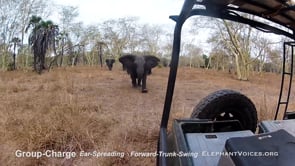 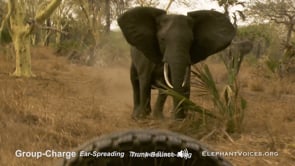 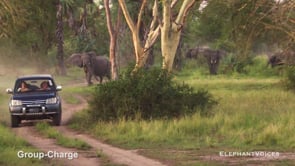