In slo-mo, gf0034 and calves are moving away. gf0034 stops and Freezes momentarily - her Foot-Lifted, Ears-Stiff and Head-Swinging. Her calves continue walking. (Gorongosa, Mozambique)

gf0070 and her family are moving away. gf0070 is still alert she stops Freezing with Ears-Stiff, Chin-Up, J-Trunk and then continues. She raises her trunk in a Periscope-Trunk. This is followed by the same from her daughter. Then a bit further on they all Freeze, gf0070 with Chin-Up, Head-Swinging. (Gorongosa, Mozambique)

Provocadora, gf0012, is walking when she seems to detect our presence. She stops, turns to face us, Ear-Spreading and then Freezing. She draws herself up to full height, Chin-Up, Listening, before lowering her head and continuing on. (Gorongosa, Mozambique)

The Mabenzi family are departing after a Group-Advance on us. Valente is leading the family. She stops Freezing, Ears-Stiff, Chin-Up and then Initiates-Movement again. (Gorongosa, Mozambique)

After a Group-Advance on us, the Mabenzi family is in retreat and are moving out onto the floodplain, when they Freeze, Head-swinging, Ears-Stiff, Chin-Up. The camera catches them in mid-freeze then Valente takes a step backward as if preparing to walk and a young female behind begins the movement. A Procession follows. (Gorongosa, Mozambique)

In slo-mo: After much contemplation Corajosa, gf0054, Head-Shakes and Advance-Toward us and then Stand-Tall facing us and considering us - She Freezes - Ear-Spreading, Ears-Stiff, Head-Swinging - Listening. She then turn and walk away Initiating-Movement. She is followed by Bullet, gf0032 and gf0152 and 6 calves. They walk about 30 paces and then Freeze and Listen, Ears-Stiff. They stand for some time and then take another 10 paces before Corojosa Freeze again, Listening after she Back-Toward Bullet. All Freeze, Ears-Stiff, Corojosa with Open-Mouth. Finally gf0152 Initiate-Movement and they leave. (Gorongosa, Mozambique)

Matriarch Nalakite (tuskless female), her family and associating males are walking up an incline through Faidherbia woodland. Nalakite takes up the rear position in the group. We hear the sound of cattle bells meaning that Maasai and their livestock are in close proximity. Nalakite exhibits Tail-Raising and then Freezes and Listens in an alert posture with her Chin-Up as we hear guinea fowl alarm call. The camera pans forward to show that the others ahead of her have stopped, too - though they have begun to relax and there is some movement starting. (Maasai Mara Kenya)

The F family are moving away from us into the forest. gf0035 a large tuskless adult female stops suddenly - Chin-Up, Ears-Stiff, and Head-Swinging - Freezing and Listening. The others Freeze with her. Then they begin Ear-Flapping again as they relax. (Gorongosa, Mozambique) 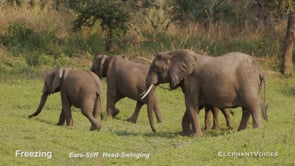 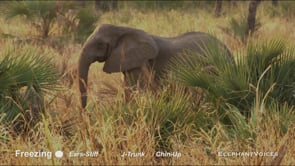 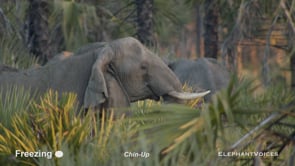 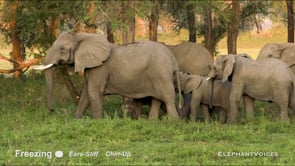 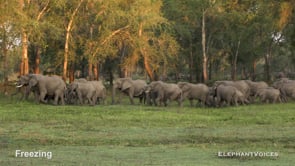 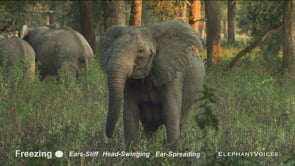 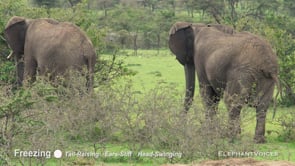 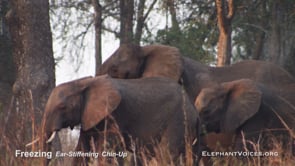