Pascal is Guarding Qadija in estrus and there is a lot of tension between the males who are waiting for an opportunity to Mate with her. We had stopped for a quick cup of tea/coffee and were caught off guard when Upendo attacks another large adult male.

As the clip starts Pascal is heading toward us following Qadija at a fast pace. Another large male moves out of his way. Meanwhile, Upendo is heading in our direction Head-High and Ears-Folded. In the middle of this is an adolescent female who, feeling caught or anticipating something is about to happen is Rumbling loudly with an Open-Mouth. Further back someone Trumpets. Upendo bears down on the other male and they clash, Upendo forcing the other male back at least 8 steps.

There is more Rumbling and Trumpeting by a large female with a broken right tusk. The two males face one another, Heads-High, Ear-Waving and Ear-Folding. Neither one had appeared to be in musth earlier but now they both have Temporal-Gland-Secretion and are acting as if in musth. More Trumpeting and Rumbling from the female spectators who reach their trunks out toward the two males. The loud Rumbling continues and then the female who has been calling and her calves streak across the plains behind the fighting males. Then they stop and turn to watch, as if they wanted a better view. The two males face one another Heads-High and Ears-Folded. The other male Advances-Toward Upendo who Backs-Away. There is quite a bit of Backing-Away and Advancing-Toward as the two males size one another up.

A medium sized male comes into view and comes to stand between the fighting males, though just further back, watching them with Periscope-Trunk. Upendo Advances-Toward the other male and Kicks-Dust. Upendo Backs-Away about 9 paces, Ear-Folding. It seems Upendo just wanted to give himself a bit of space to attack, because then with Periscope-Trunk he Runs 8 paces at the other male and then Lunges at him forcing him back. We hear about 9 Tusk-Clanks. The losing male gives a V8-Rumble.

The family is still watching as the males pause to face one another and then the loser Runs-Away and Upendo Runs-After him. The family who had been watching run, too, Trumpeting. Then they turn to face Upendo and trumpet again. Upendo pursues the other male and everybody Runs-Away. As the camera pans to the right we see Pascal, who has also been watching. As a result of his inattention to Qadija, she is being Chased by other males. He realizes and turns to Run-After them. A young male is Reaching-Over her back and Pascal manages to catch up and the male abandons his attempt. There is a Trumpet. Note that other than the V8-Rumble all of the vocalizations are made by females. (Amboseli, Kenya)

In a large aggregation with an estrous female are several musth males (ultimately 5!). X076 in musth is Guarding the estrous female and heads with her to the swamp. Two other musth males, Tee-Jay and Gordon, start a fight at the beginning of the clip, but elephants in the foreground block our view. Tee-Jay with the long even tusks on the left is just entering musth and is taller than Gordon with the broken tusk who is in full musth. After their first interaction they maneuver around one another, Gordon Head-Shaking, before Tee-Jay initiates a Parallel-Walk away from us for about 100m. They engage in several minutes of maneuvering around one another. Tee-Jay has the upper hand, Advancing-Toward Gordon who Backs-Away. Then Gordon initiates another Parallel-Walk, toward the mountain.

There is an other scene of Parallel-Walking in which they have switched places. There is more maneuvering in the long grass as Tee-Jay circles around Gordon and Advances-Toward him. Gordon Backs-Away. Tee-Jay continues Advancing-Toward Gordon and climbs a termite mound to Attain-Higher-Ground. He Stands-Tall and does a Head-Toss. Gordon Looks-At him and Backs-Away. They stand there. Tee-Jay comes down and they circle around and swamp places. Gordon climbs the same mound to Attain-Higher-Ground and Reaches-High and then backs down. In the next scene they engage in another Parallel-Walk this time coming toward us. I mention that another musth male has arrived and is watching the fight out of view. This male is Paolo. Again Tee-Jay circles around Gordan Advancing-Toward him while Gordan Backs-Away.

Throughout Tee-Jay really carries his Head-High and Chin-in posture and Ear-Folds persistently. Tee-Jay Lunges toward Gordon and they Tusk-Clank in a Duel. Tee-Jay forces Gordon back, but after they separate Gordon Advances-Toward Tee-Jay who Backs-Away. They both Musth-Rumble. Gordon Head-Shakes and Tee-Jay circles around and comes to face him. He Musth-Rumbles. When Paolo is about 50 m away both males turn to face him, Waiting for him with some visible apprehension. Gordon is Foot-Lifting and holds his trunk under. Paolo walks toward them with Head-High, Chin-In in a very dominant posture while Tee-Jay's bravado has changed and he Waits for Paolo with Trunk-Toward and his chin further out than earlier. Paolo continues to Advance-Tooward them and at about 3 m Tee-Jay Backs-Away. Both males Retreat-From Paolo. Paolo's arrival breaks up the fight, whether purposefully or not.

Note that I have not included some of the very common behaviors that are typical of an Escalated-Contest. Both males do a lot of Trunk-Curling - especially Tee-Jay around his longer tusk. Tee-Jay also engaged in a lot of persistent Ear-Folding, while Gordon Head-Shakes and Head-Waggles (allowing his ears to audibly flap) often. It appears that each male has favored displays to use when fighting. I have also not named the circling maneuver that they are using which is typical of Escalated-Contests. (Amboseli, Kenya) 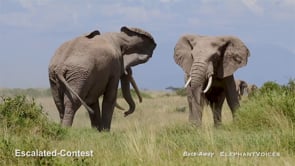 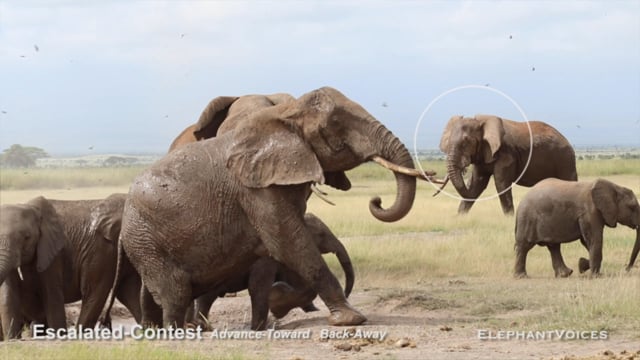