Two elephants rushing toward one another, head to head, attempting to Tusk, Push, Ram or interlock tusks to leverage an opponent down to the ground or manoeuvre him into position where he can be gored. Dueling typically involves two contesting musth males.

It is unusual for females to fight with males, but when it occurs it is likely between an adult female and a teenage male and typically when the young male is behaving inappropriately toward her or toward a member of her family. In this case Ozora is in estrus and being lightly Guarded by Liaqat. A young male, about 15 years old, smaller than her and perhaps 15 years younger, is interested in her and, perhaps frustrated by her lack of interest in him, becomes aggressive. We use the term aggressive Sparring, but if one studies the behavior this is closer to Dueling.

Following on from Dueling agg 01 the group with Ozora in estrus and Liaqat lightly Guarding her is moving toward the swamp. The same 15 year old male is still harassing her, though he is careful of Liaqat's proximity to her.

Here the marked behaviors only include Ozora's, who is circled: As Liaqat follows behind Ozora the young male can be seen Backing-Away from her (and him). But, when Liaqat stops to Ear-Wave at the male behind him, the young male in front takes advantage, Advancing-Toward Ozora and threatening her. She Ear-Folds and Lunges at him and they Tusk-Clank. Liaqat appears in frame and the troublesome young male Backs-Away and Ozora Advances-Toward the young male Ear-Folding and Ear-Slapping. (Amboseli, Kenya)

There is tension around an estrous female. A new medium sized male has just joined the group (Male1) and a second medium sized male with two broken tusks (Male2) has taken exception to his arrival and threatens him Ear-Folding and Advancing-Toward them. A third smaller male (Male3) joins Male2 in a Coalition and together they Group-Advance on Male1 who Retreats-From. Male1 turns to face them Head-High and Ears-Spread and Male3 Orients-Away. The two males stand facing one another Head-High and Ears-Spreading. They make contact and Tusk-Clank. Male1 Lunges at Male2 and forces him back. A fourth male (Male4) arrives and joins the Coalition and bolstered Male2 pushes his advantage. after the end of the clip they gang up on him and outnumbered he turns and Runs-Away emitting a V8-Rumble followed by a Rumble-Roar and another V8-Rumble. (Amboseli, Kenya)

There is tension around an estrous female. A new medium sized male joined the group (Male1) and a second medium sized male with two broken tusks (Male2) took exception to his arrival and threatened him Ear-Folding and Advancing-Toward them. Two additional males joined Male2 in a coalition and saw off Male1. Male1 and Male2 had a brief fight after which the three males went after Male1 in a prolonged pursuit.

As this clip begins Male2 is Pursuing Male1 who turns to face him. They Advance-Toward one another Heads-High and Ear-Spreading and Ear-Folding. Male1 forces Male2 to Back-Away. As they are about to clash they stand facing one another Chins-Out, Heads-High and then Tusks-Clank as Male1 Lunges at Male2 forcing him back. They separate and both engage in Check-Tusk as they examine whether their tusks have been damaged. (Amboseli, Kenya)

There was tension around an estrous female and two males began an Escalated-Contest which lasted close to 4 hours. During this time they engaged in Dueling 3 times. This clip is the last one.

There was tension around estrous female Amparo as Pascal prepares to Mate with her. The family and several younger males gather around to watch as Pascal Reaches-Over and Amparo and Dram (the tuskless) vocalise. One medium sized male with a broken right tusk (Male 1) has a close up view. Another male arrives and Male 1 challenges him - Advancing-Toward him with Ears-Folded. The two Duel. Heads-High and Lunging at one another as their Tusks-Clank. We see Male 2 Trunk-Drag-Bounce as Male 1 is forced back. A third, larger male (Male 3) is annoyed by the fight and Runs-After the Male 2 who Runs-Away. We hear females Rumbling in comment about the fight. (Amboseli, Kenya) 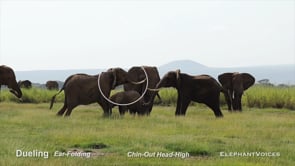 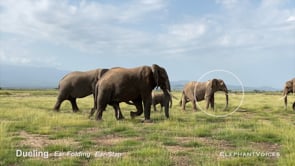 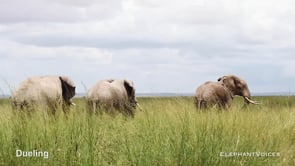 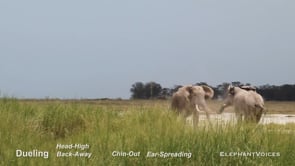 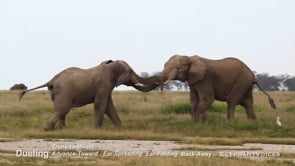 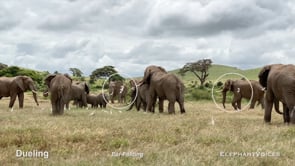