A female in estrous is in Consort with a male in musth. The clip begins as the female begins to walk. She takes 6 steps before the Guarding musth male begins Move-Toward her; he is Maintaining-Proximity. She takes 16 steps in total before stopping in the shade of a tree, where she Waits for him. Her family members move to join her. The musth male takes 20 steps and stops within approx. 3 meters of her. They both stand alert and Waiting for someone to make the next move. (Maasai Mara, Kenya)

The clip starts with the estrous female as the closest elephant in view, she is Walking. The musth males is Moving-Toward her to Maintain-Proximity. She slows down at a tree making sure he is with her - Walk-Wait. She continues walking and he follows her. She stops and he stops. He begins Rubbing on the tree and she Listens to him and Looks-Back. She takes 4 steps and he begins to Move-Toward her again. As she goes out of frame the musth male continues to Maintain-Proximity.

The camera eventually pans out to reveal the estrous female and the musth male. He is about 9 meters behind her. They both participate in staying in close proximity. (Maasai Mara, Kenya)

An estrous female and a musth male stand in parallel. They are in Consort. The estrous female is idly feeding, staying close to him; the musth male is alert, monitoring her movements. Her tail is slightly raised. She takes 5 steps and pauses, Walk-Wait, Foot-Forward, monitoring his location. He Orients-Toward her, Monitoring her movement. She takes another 6 steps and he begins to Move-Toward her, Maintaining-Proximity, Guarding her. (Maasai Mara, Kenya) 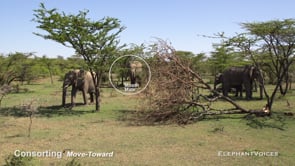 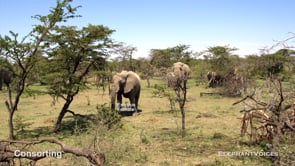 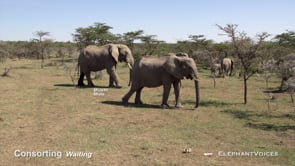