Adult females (or very rarely adult males) engaging in a highly coordinated action against another elephant, group of elephants, human adversaries or other predator. Among females Coalitions are initiated with much dramatic behavior and physical movement such as Trunk-Sweep, Purposeful-Walk that appears to function as a ‘heads-up’ and to galvanise and guide the action, timing and direction of others in the group. As the elephants Bunch together they exhibit Head-Raising, Head-Swinging, Vocalizing, Rapid-Ear-Flapping and Ears-Stiff. The initiating individual(s) may approach their companion(s) rapidly coming along side her/them in parallel or face-to-face; they may Vocalise in chorus, sometimes Tusk-Clicking together, reaching into one another’s mouths (Reciprocal-Trunk-to-Mouth), or intertwining trunks (Trunk-Twining) raised in a High-Five. Then, in unison, they turn on the affronting individual in a Group-Advance or Group-Charge.

In Coalitions against another group of elephants, it is typically an older female, often the matriarch, initiating the coming to aid of a younger family member who may have been kidnapped or attacked. Likewise, Coalitions against human threats or predators are typically initiated by an older female, often the matriarch. Younger family members participate, but are not lead players. Among males an older male may assist a younger male in a coalition against another male.

There is tension around an estrous female. A new medium sized male has just joined the group (Male1) and a second medium sized male with two broken tusks (Male2) has taken exception to his arrival and threatens him Ear-Folding and Advancing-Toward him. A third slightly smaller male (Male3) joins Male2 in a Coalition and together they Group-Advance on Male1 who Retreats-From.

Note that a fourth male (Male4) can be seen in the first view on the far left. Male1 turns to face them Head-High and Ears-Spread and Male3 Orients-Away. The two males stand facing one another Head-High and Ears-Spreading. They make contact and Tusk-Clank. Male1 Lunges at Male2 and forces him back. Male2 uses the tip of his trunk on both tusks to Check-Tusk. The fourth and slightly larger Male4 arrives and joins the Coalition and, bolstered, Male2 pushes his advantage.

The three males gang up on him and outnumbered Male1 turns and Runs-Away emitting a V8-Rumble followed by a Rumble-Roar and another V8-Rumble. The three males work in a Coalition for another 4 minutes following him in a Prolonged-Pursuit, sometimes in Group-Advance at a fast walk and sometimes Running-After him in group-Charge. He turns to face them but they continue coming and he Runs-Away and gives another V8-Rumble. They come around in a wide arc all three males working together in a gang, with Male2 the main aggressor (persistent Ear-Folding and Running-After Male1) but unable to dominate Male1 without the help of the two other males and particularly Male4. They Pursue him around sometimes at a fast walk sometimes at a run. Suddenly the smallest males, Male3, finds himself at the lead and slows to Look-Back to see if the others are coming. He pauses and Waits for them. Male4 also Waits. When Male2 has caught up and they are in a Phalanx they all begin to Pursue him again. With Male2 in the lead they go with him for about 20 meters before Male3 and Male4 stop and Male2 Pursues him for several hundred meters before they Duel a second time.

In all they Duel 3 times. Male4 was on standby intervening to help for over 2 1/2 hours. (Amboseli, Kenya)

Following on 20 minutes after 'Coalition. Context Aggressive (1)' and after a third bout of Dueling (Dueling. Context Aggressive (5)) between Male 1 the longer tusked male and Male 2, the broken-tusked male (won by Male 1), Male 4 comes to Male 2's assistance again. As this clip begins we see Male 2 Back-Away from Male 1 who Advances-Toward him. Male 2 Looks-Back as if Waiting for someone. Male 2 continues to Back-Away but suddenly Male 1 draws up short Head-High as if he has seen someone coming. Male 2 continues to Back-Away and male 1 Advances-Toward him for about 25 meters. We see Male 2 stop and Look-Back. Both Wait. Male 1 Backs-Away a few steps. Male 2 continues to Look-Back and then suddenly Male 4 (larger than both Male 1 or 2) enters the view with a Periscope-Trunk and Male 2 turns and the two form a Coalition and Group-Advance on Male 1. Male 2 adopts an aggressive posture and Purposeful-Walk as he moves toward Male 1 who Backs-Away. Male 1 continues to Back-Away until Male 2 is within 2 meters of him and Male 4 is about 15 meters away and coming fast. Then he turns and Runs-Away with Male 2 Running-After him. Male 4 stops and watches and then having apparently accomplished his goal he walks away. (Amboseli, Kenya)

Following on from 'Coalition. Context Aggressive (1 and 2)', this is another example of Male4 helping Male2 in his Escalated-Contest with Male1. In this scene the two contestants have been engaged in Displacement-Behavior - Dusting and messing about with trunkfuls of grass. Male1 Advances-Toward Male2 who Backs-Away. At this stage we see Male4 start to Advance-Toward the two, coming to Help Male2. We see Male2 Look-Back several times to see whether Male4 is coming. As Male4 arrives Male2 presses his advantage and Advances-Toward Male1 with an aggressive posture. Male1 Retreats-From and Backs-Away. Male2 Advances-Toward Male1 with an Open-Mouthed aggressive posture and then briefly Runs-After him. As Male1 turns to face him he stops short and Kicks-Dust. They Stand-Tall. Male2 keeps Advancing-Toward Male1 who Looks-Back. Then Male1 turns to face Male2 again and Male2 Back-Away and Looks-Back to see where Male4 is.

Out of view during this period Male4 is still with them and as he comes closer Male2 again has the upper hand. There is back and forth because Male1 is larger and dominant to Male2, but Male2 has the advantage when he is Helped by Male4 who we see in view again at the end. Notice that Male2 keeps Looking-Back to see whether Male4 is with him. (Amboseli, Kenya)

Following on from 'Coalition. Context Aggressive (1,2, 3 and 4)' this is another example of Male4 helping Male2 in his Escalated-Contest with Male1. At the start of this scene Male4 is still in the shade of the tree. Male2 Advances-Toward Male1 and they stand on the plain threatening one another, neither one willing to fully take on the other. Male1 looks as though he is fed up and wants to leave, but every time he turns to go Male2 Advances-Toward him and he turns back to face him, stopping him. But then Male4 enters from the right and immediately Male2 Advances-Toward Male1 with a very aggressive posture - Open-Mouth, Trunk-Curled-Under as if to bounce or drag it, Ears-Folded. He moved rapidly toward Male1 who Backs-Away. Male4 follows them in a lazy sort of way.

Male2 is really pushing for a fight and they make contact briefly. But Male4 comes up close to them; it is hard to tell but it looks as if Male4 gives Male2 a slight threat and Male2 appears to Retreat-From. Male1 Retreats-From but then stops a few steps away and Male4 reaches Trunk-to-Genitals in what I believe is a Conciliatory gesture. Male1 Tail-Swats him and Male4 touches his tail. Male4 Walks-Away and that is the last time he Helps Male2. (Amboseli, Kenya)

A large aggregation is visiting a pool in Kitirua. Families are arriving in waves and interacting with those already Bathing and Playing. A female with a broken right tusk ('Broken Tusk') and an infant has been in the pool for a while (circled) when Zap (circled on right with asymmetrical tusks), her son and other family members arrive. Zap faces off with Broken Tusk. Then Zap's 10 year old son moves forward to help his mother. He Ear-Folds at Broken Tusk who Ear-Folds back but Retreats-From him and leaves. He Advances-Toward her. She is out of view but he (circled) holds his Chin-In and Ear-Folds in an aggressive posture. His mother watches.
As the clip zooms in we see Zap's son and Broken Tusk facing off and almost coming to blows. Broken Tusk Forward-Trunk-Swings at him and he Retreats-From and she Advances-Toward him Ear-Folding. As the clip pans out we see that Zap has come to help her son and Broken Tusk is Orienting-Away. Zap Runs-After Broken-Tusk who Runs-Away and Zaps son joins his mother in Running-After her. He continues past his mother Running-After Broken Tusk with Ears-Folded and Tusks her in the backside. We hear elephants Rumbling in response to the interaction. Zap's son stops and Broken Tusk turns to wait for her infant who has been left behind. There is loud Rumbling and a Trumpet and Broken Tusk and Zap's son face one another Ear-Folding. Broken Tusk Runs-After Zap's son who Runs-Away giving a V8-Rumble (I think that is him). Zap then comes to help her son and the two turn on Broken Tusk again. The two Advance-Toward her with Ears-Folding and she Retreats-From again. We see Zap Ear-Flapping and we can hear Rumbling and then additional members of her family appear to join the Coalition. There is Rumbling back and forth between Zap and the newcomers.
As they join Zap and her son, Broken Tusk Head-Shakes in presumed annoyance and Stands-Tall. With the reinforcements arrival Zap's son initiates a Group-Advance and all five or six of them Advance-Toward Broken Tusks. After the end of the clip the gang turns to greet another member of the family and B. (Amboseli, Kenya) 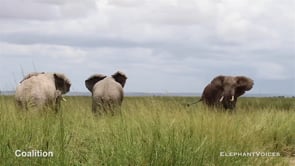 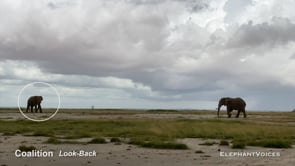 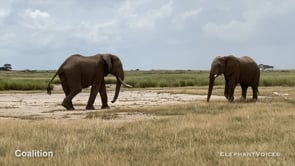 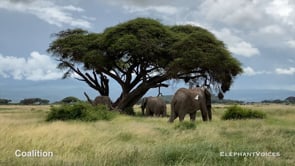 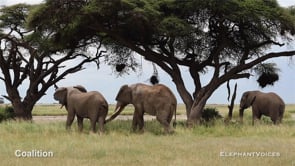 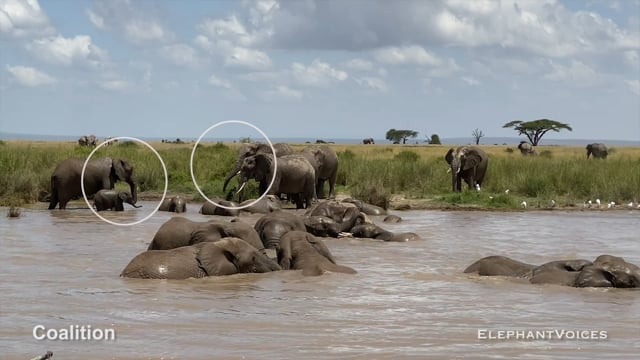