Opening the eyes wide, sometime exposing the ‘white’ of the eye. An elephant normally casts is eyes downward. An alarmed, frightened or highly excited elephant may open its eyes wide. Eye-Widening may also be seen during intense Affiliative and excited Social Play contexts.

Males and females, adolescents and adults, are playing in the bushes along a lugga. As the clip starts an adolescent female comes up the bank into view. She moves past the car in a Floppy-Run, emitting Pulsated-Play-Trumpets, crashing through the bushes, kicking vegetation with her feet (Bush-Bashing). Her eyes are wide (Eyes-Wideg) and she is Tail-Raising. She adopts a floppy Bow-Neck-Charge as she makes a dash past the car and back into the bushes. (Maasai Mara, Kenya) 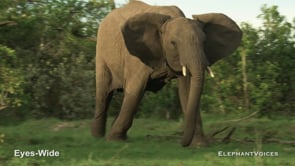