Opening and closing of the eyes by an Attentive or Vigilant elephant. This is contrasted with the normal position in which the eyes are cast downwards. While an elephant regularly blinks its eyes, as we do, Eye-Blinking is a noticeable component of an elephant who is considering a situation, as when a mother is Suckling her calf (See Suckle-Face) an elephant is Contemplating.

As f0313 contemplates filmmakers Bob and Gina at close range she opens and closes her eyes and listens to them and appears to consider them. (Maasai Mara, Kenya)

This female seems to be listening attentively, while Eye-Blinking, then she rumbles and Listens and Eye-Blinks again. (Maasai Mara, Kenya) 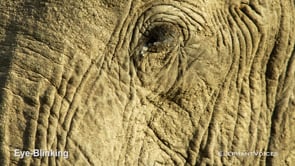 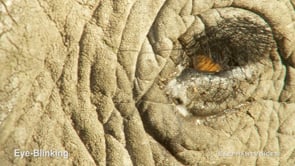