An elephant holding his or her ears tensed, cocked or stiffened. An elephant normally holds its ears in a relaxed position such that they rest approximately 10-30cm from the side of the body with the tops of the ears level with the top of the head. In this relaxed position the ears do not appear stiff or tense, lifted, spread, or pressed against the body. Different age sex group may be observed to stiffen their ears in different contexts.

In general, Ears-Stiff indicates than an elephant is Attentive, Vigilant or engaged in interaction with another elephant. Listening, Freezing, Contemplating elephants all display Ears-Stiff. Ears-Stiff is a component of the Musth-Constellation as well as Wariness in Estrous-Females.

A male calf becomes aware of something concerning (perhaps the presence of the vehicle or being too far from others) and walks with Ears-Stiff as he moves in the direction of his mother. (Maasai Mara, Kenya)

A 4 year old female calf has come up from the lugga, looking as if lost (note: We heard Lost-Calls and she exhibits Ears-Stiff and has a pinched face). A juvenile male sees/hears her and he Advances-Toward her and tests her (Trunk-to-Genitals) and then lightly Tusks her. She continues with Ears-Stiff as he and she go their separate ways. (Maasai Mara, Kenya)

An impala runs up from the river and alarms a group of elephants. The older females in the back Freeze and Listen. The adolescent female in the foreground is more apprehensive and exhibits Tail-Raising with Ears-Stiff. (Maasai Mara, Kenya)

A mother and calf walk past the filming vehicle. Both mother and calf are slightly concerned. The mother changes directly slightly while the calf exhibits Eyes-Wide with Ears-Stiff. (Maasai Mara, Kenya) 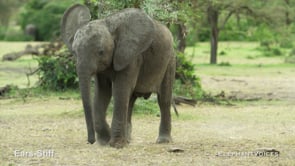 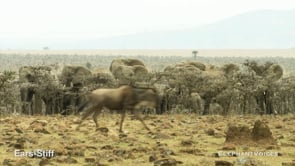 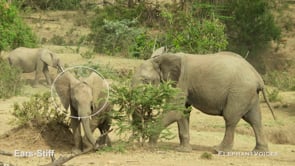 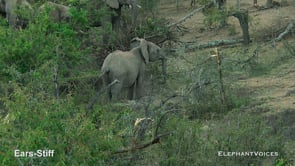 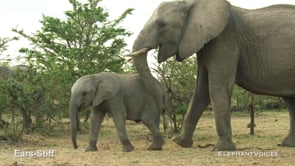