Standing or moving with the ears fully extended at ~90 degrees from body. An elephant normally holds its ears in a relaxed position such that they rest approximately 10-30 cm from the side of the body. In this relaxed position the ears do not appear stiff or tense, lifted, spread, or pressed against the body.

Elephants may Ear-Spread when facing an opponent, predator or presumed threat, presumably for the purpose of appearing larger. Elephants may also spread their ears when they are Listening, surprised, alarmed or otherwise aroused. All age sex groups engage in Ear-Spreading.

An adolescent male is pretending to be tough. He moves toward the filmmakers Ear-Spreading. His floppy body movements indicate that this is playful. (Maasai Mara, Kenya) 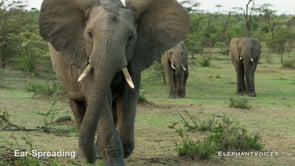