Slapping the ears loudly and sharply against the neck and shoulders. In a Movement Space and Leadership and Avoidance context this gestures is typically made by an older female, often the matriarch, who appears to use it to call attention to her location and (changing) activity or movement. In Aggressive, Coalition Building or Attacking & Mobbing contexts, it is used in association with Ear-Folding as an elephant Advances-Toward its adversary.

Pascal in full musth is Guarding Qadija of the QB family. An adolescent female, who I think is Qaskasi - Qasima's daughter, reacts as Pascal approaches - Ear-Slapping and giving what I believe is a Female-Chorus-Rumble. (Amboseli, Kenya) 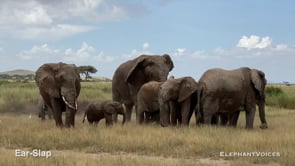