Slapping the ears loudly and sharply against the neck and shoulders. In a Movement Space and Leadership and Avoidance context this gestures is typically made by an older female, often the matriarch, who appears to use it to call attention to her location and (changing) activity or movement. In Aggressive, Coalition Building or Attacking & Mobbing contexts, it is used in association with Ear-Folding as an elephant Advances-Toward its adversary.

The F family has heard our vehicle and are acting Apprehensive and Vigilant. gf0034 is seen Listening and Head-Swinging, her head raised and turning from side to side. The camera pans left to gf0033 and tuskless female gf0035 who is also Listening and steps forward. Then the camera pans back to gf0033 who Ear-Slaps and gives an Ear-Flap-Slide and Initiates-Movement for a Full-Retreat of the family further from us.

Note that as gf0033 walks toward gf0035 she has an Open-Mouth indicating that she is vocalizing, but there is no audio and, in any case, we are too far away to hear. In another view again she Ear-Slaps initiating further retreat. (Gorongosa, Mozambique) 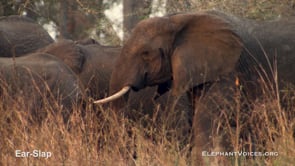