Flapping the ears moderately loudly and then swishing them against the neck and shoulders causing a rasping sound. For added effect, the elephant may tilt its head upwards and outward, sometimes to one side, while swishing the ears against the body. Used by elephants of all age sex groups when changing activity and, particularly audibly by adult females during Movement Space and Leadership and Avoidance contexts apparently as a signal to other family members of intention to move, depart or to change activity. 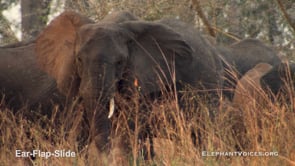