An Attentive elephant plucking at vegetation, as if foraging, but typically not ingesting any of the material, or doing so in a desultory or distracted fashion. Performed in conflict situations such as in Aggressive, Submissive, Conflict & Confrontation, Courtship, and Social Play contexts when an individual shows incompatible tendencies, such as fleeing versus attacking.

Prior to the start of this clip, adult male, gm0040, Aloisio, Advanced-Toward our vehicle and came to investigate us in a mildly threatening manner, reaching his Trunk-Toward us sniffing, and Standing-Tall while Ear-Spreading. He climbed up a bank to Attain-Higher-Ground, from where he threatened us Standing-Tall (Chin-Up and Ear-Spreading).

As this clips starts he Advances-Toward us in a kind of lunging movement, and does a Head-Dip and then he stands Contemplating us. He is unsure what to do next and appears to begin Displacement-Feeding. (Gorongosa, Mozambique)

These two males are engaged in an Escalated-Contest that lasts almost 3 hours. As the clip starts the short-tusked male is Displacement-Feeding as the longer-tusked male Advances-Toward him. They stand facing one another. The longer-tusked male grabs a trunkful of grass but is really watching the other male, who then Retreats-From. (Amboseli, Kenya) 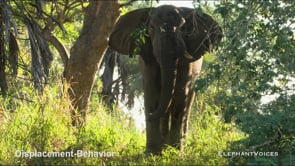 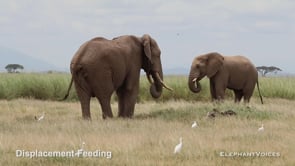