Rumbling by adult females in the context of Coalition formation. During conflicts between females, especially between females from different families, or between a female and a young male, the matriarch or another large adult female often comes to the aid of a younger member of the family. During such Coalitions, the older female rapidly approaches the female in conflict and, as she reaches her side, they may display High-Fiving, Open-Mouth-to-Open-Mouth, reciprocal Trunk-to-Mouth, Tusk-Clicking. As they raise their heads high they and prepare for a joint attack on a young male or on another female(s) they Rumble in unison. We refer to calling in this context as Coalition-Rumbling. In Gorongosa, we observed this same behavior as family members coalesced to form a Coalition against us.

We do not have a large enough sample size of calls emitted in this context to know whether calling associated with this type of behavior is a separate Rumble sub-type, but the specific behavior of the elephants when calling, suggests an area for further research.

This behavior occurs in the following context(s): Coalition Building

This clip comes from the end of a long sequence which starts with a Group-Advance by the C family in which we were mobbed. They have come around a palm after having surrounded us. Some appear to be starting to depart, including tuskless adult female gf0029.

As the clip starts we see gf0029 standing and Listening - there had been some rumbling before from behind her. She turns back from where she is as we hear more deep rumbling and the elephants begin to form a Coalition against us. gf0029 is seen to make a Purposeful-Walk to join Corajosa, gf0054, and Bullet, gf0032, and the others who Bunch together to face us - as if this low rumbling is a call to action.

We often hear this type of deep, barely audible rumbling in this context. gm0036 and some family males are present. gm0036 Trunk-to-Mouth to Corajosa, gf0054. Note that we have added 5dB to the low frequencies and reduced 5 dB from Joyce's voice to help the listener hear these very low frequency rumbles. (Gorongosa, Mozambique) 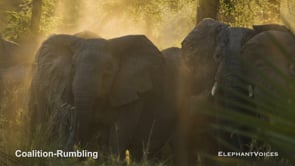