Using the trunk to pull on the appendages of a dead elephant. Elephants may be observed to grasp the trunk, leg, tusks or tail of a dead elephant and pull. We separate Lift-Carcass and Pull-Carcass, but others have used the terms interchangably. Goldenberg & Wittemyer (2019) comment that attempts to lift or pull fallen elephants were restricted to very fresh deaths. This is also our observation.

Her family had already departed, unaware of what had happened to her, but four young males were headed her way. They came with a light step until they saw Polly, then they lifted their Trunks-Toward her and in Periscope-Trunk posture, and moved toward her. The sequence of images shows two males. The oldest male, Kasaine, reached his Trunk-Toward her and touched her on her back. Then he moved to her left tusk and touched it, while another younger male touched her back. He lifted his left foot and stepped on her trunk rolling it gently back and forth underfoot still touching her tusk with his trunk. The younger male moved around further to Polly's hindfeet and grasped and pulled her tail, while Kasaine touched her upper body with his right forefoot. Then Kasaine walked around to the other side of her head and again wrapped his trunk around her tusk and began to Pull trying to Lift her, moving her head into a new position, while the younger male engaged in Flehmen-Carcass.

Failing to Lift her, Kasaine walked around her body and began to Mount her, while the younger male moved to stand near Polly's head. During the next half an hour Kasaine Mounted her repeatedly. The following day, after the rangers had removed her tusks, we returned to her body and found three males standing in Silence over her, touching her body and bloodied face where her tusks had been removed. One of them was Kasaine. (Amboseli, Kenya)

This clip is made from a series of photographs. Early one morning in 1980 a colleague had seen an elephant out on the plains alone and ''dropping to her knees.'' On her return trip she said that she thought there might be a dead baby at her feet. We drove out to see and found Tonie with a dead infant. She was still having contractions and blood was dripping from her vulva. Her behavior was very subdued and unlike the exuberant behavior of another mother in Tonie's bond group who I had recently witnessed give birth.

Tonie stood quietly, her head and ears drooping forward, playing slowly with the afterbirth with her trunk, The newborn at her feet was dry, and she repeatedly nudged it gently with her feet and trunk and Pulled it toward rolling it over several times, apparently trying to get it to its feet. Tonie stayed with her dead baby for close to 48 hours. (Amboseli, Kenya) 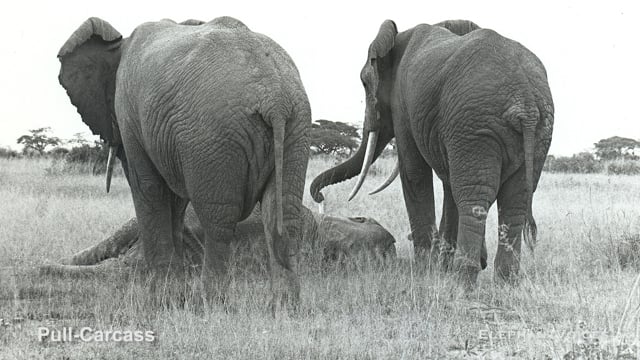 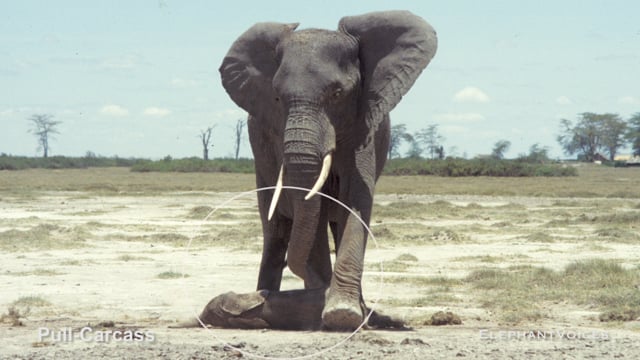