An elephant Standing with its “chin” or face stretched outward toward another elephant he or she is facing making the neck appear elongated and the head higher. This is an anticipatory posture and the elephant is typically Standing and Waiting for a response. Often observed in the context of Sparring or during an Escalated-Contest. A sudden thrusting of the Chin-Out often initiates a new round of contact.

Six males are standing around estrous female, Nastya. The youngest male has Backed-Toward a larger male in a cozy fashion as if he is confident that he won't be Pushed or Tusked - as if they know one another, perhaps related. A new male arrives in the group and the young male puts his Chin-out in anticipation. He stands with a Foot-Forward, then he puts his Chin-Out again. He gives a couple of Head-Dips and reaches Trunk-Toward to touch the other male, again with Chin-Out. He stands with Chin-Out and Foot-Forward. Then he Backs-Toward the older male again. (Amboseli, Kenya) 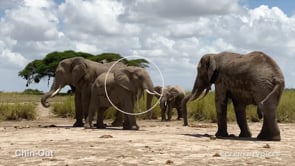