An elephant Standing with its “chin” or face stretched outward toward another elephant he or she is facing making the neck appear elongated and the head higher. This is an anticipatory posture and the elephant is typically Standing and Waiting for a response. Often observed in the context of Sparring or during an Escalated-Contest. A sudden thrusting of the Chin-Out often initiates a new round of contact.

Two males are engaged in a long Escalated-Contest. In this section the male with the longer tusks has the upper hand. He makes several Advances-Toward the male with the shorter tusks and adopts Periscope-Trunk with his Chin-Out. (Gorongosa, Mozambique)

This is an excerpt from an Escalated Contest between two males that lasted close to three hours. At this stage they have already engaged in 3 bouts of Dueling. During this particular clip the aggressor - the male on the right Advances-Toward the male on the left and there is a stand-off, neither one willing to fully take on the other. The broken tusked male is the more aggressive, but the male on the left looks slightly larger and stands in an expectant posture with his Chin-Out. His Chin-Out posture than changes to a Stand-Tall. When he takes two steps toward the broken-tusked male, the broken-tusked male Backs-Away and Head-Shakes. (Amboseli, Kenya)

This is a short section of a close to three hour Escalated-Contest between these two males. Up until this point the broken-tusked male (on the right) has had the help of an older male who has intervened each time he needed help. Now the older male has reconciled with the long-tusked competitor (on the left) and departed and the broken-tusked male is on his own. Here he catches up with the longer tusked male. The longer-tusked male has access to a mud-wallow and is confident enough to stand on lower ground. Notice how he adopts a Chin-Out posture when engages with broken-tusks. (Amboseli, Kenya)

This is the last interaction of an almost 3 hour Escalated-Contest during which the broken tusked male has had help from an older male who intervened on 5 occasions. The older male has now departed and the tables have turned and the longer tusked male has the upper hand. He Advances-Toward the broken-tusked male in a Chin-out posture - and times this is so exaggerated as to be technically a Bow-Neck-Advance-Toward. Their interaction in rather gentle now and they almost Spar both reaching Trunk-to-Mouth. And then they seem to call a truce and go their separate ways with the longer tusked male the winner of the Escalated-Contest. (Amboseli, Kenya) 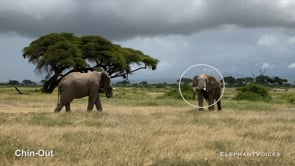 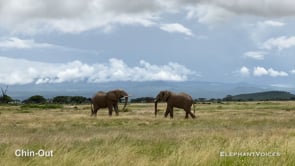 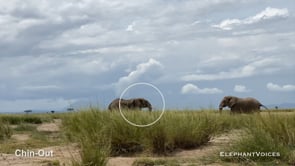 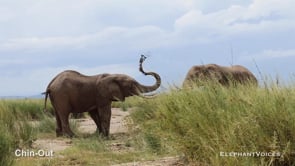 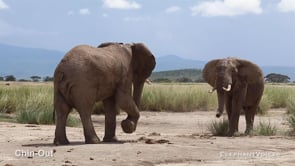 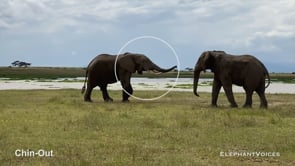 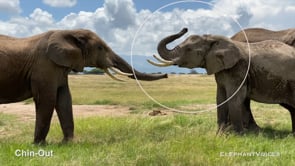