A male in musth Standing or Walking with his head held well above his shoulders, and his “chin” or jaw held “tucked in” toward the neck. Chin-In is a component of the Musth-Walk and Musth-Constellation.

This behavior occurs in the following context(s): Advertisement & Attraction

After engaging in a bout of Flehmen, musth male Pascal catches up with Wissal of the WB family, the estrous female he is Guarding. She has been Waiting for him. He walks toward her with a Head-High and Chin-In posture. (Amboseli, Kenya) 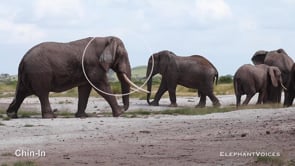