An indiviual using the trunk to throw and blow dust onto a wound. Amboseli's dusty soils are clays formed from volcanic ash. Certain clays have been found to have have antibacterial properties capable of killing pathogens ranging from E. coli to Staphylococcus aureus. Clays have been used by humans as medicinal tools as far back as 3000 BC and were commonly used in the 19th Century as topical ointments to treat wounds.  Early practitioners noted that clays reduced inflammation of wounds andwere used in pain management. Five metals iron, copper, cobalt, nickel and zinc - have been found to have to have anti-bacterial properties and at least two of these - copper and zinc - are found in volcanic ash. It is likely that Dust-Wound is an example of self-medication.

This behavior occurs in the following context(s): Foraging & Comfort Technique

Aloisio’s deformed right tusk has recently fallen out - indeed we actually found it lying on the road. The cavity is obviously causing him some pain as he continually dusts and touches it. He also rests his head against the tree as if he is not feeling particularly good. (Maasai Mara, Kenya) 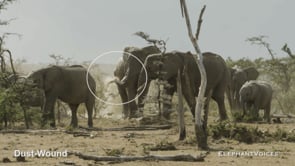 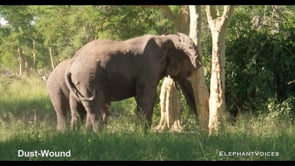