The Roar of an estrous female is often preceded by a series of short pulsated growling sounds as she Runs-Away from pursuing males. This Estrous-Running-Rumble typically develops into a pulsating Estrous-Roar. Sometimes the two calls are joined without inhalation in a combination call referred to as an Estrous-Running-Rumble-Roar.

This behavior occurs in the following context(s): Advertisement & Attraction, Courtship

Amparo is Chased by Esau and other males. Esau tries Reaching-Over but she keeps running. She Tail-Swats to monitor how close Esau is. We hear her family Rumbling and Trumpeting in excitement in the background. Then we hear her emit a series of Estrous-Running-Rumbles and two Estrous-Roars as she is caught and Mounted by Esau. It appears to be a successful Mating and we hear the start of a Mating-Pandemonium as her family runs to the scene. (Amboseli, Kenya) 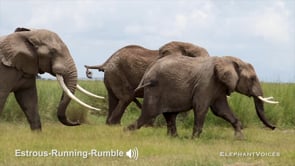