This behavior occurs in the following context(s): Courtship

After a Chase Esau stands Reaching-Over an estrous female and Mounts her. While the long grass prevents us from having a good observation, we assume from the length of time he was Mounted (37 seconds) and the fact that the female Stands-to-Mate, that this was a successful Mating. During the Mating a rival male reaches out to touch Esau Trunk-to-Mouth and Esau touches him back. (Amboseli, Kenya)

Esau has been with some other males drinking at the waterhole when Amparo in estrus arrives and he discovers her. He Mates with her with rather few preliminaries. We see a short Chase and then he reaches his trunk over her back in a Reach-Over. He is being interrupted by a younger male and pauses to Head-Swipe at him. He Reaches-Over again. And then he Drives her, Pushing her with his head and tusks on her left side. Then, Reaching-Over again, he Mounts her.

During this whole period Amparo Stands-to-Mate. Once Mounted she begins to move but Esau appears very steady and stays Mounted for 35 seconds, while she makes a 3/4 rotation. While he is Mounted the younger male Ear-Folds and circles around with them with his trunk raised high in a Periscope-Trunk posture and then Trunk-to-Genitals. At one point when Esaus tail is raised and swishing about, the younger male purposefully Backs-Toward him and appears to Tail-Swat Esau's tail! Esau dismounts and we see that Amparo engages in Ear-Folding and Rapid-Ear-Flapping and so is giving an Estrous-Rumble, though with the strong wind and long distance we can't hear it. (Amboseli, Kenya)

Amparo is Chased by Esau and other males. Esau tries Reaching-Over, but she keeps running. She Tail-Swats to monitor how close Esau is. We hear her family Rumbling and Trumpeting in excitement in the background. Then we hear her emit a series of Estrous-Running-Rumbles and two Estrous-Roars as she is caught and Mounted by Esau. It appears to be a successful Mating and we hear the start of a Mating-Pandemonium as her family runs to the scene. (Amboseli, Kenya)

The clip starts with Pascal in musth with a Penis-Erection closely following estrous female Amparo. She abruptly stops and Rump-Presents, standing with her body close to him. There is the slow moving calm that is typical of behavior immediately prior to a Mating between a high ranking, experienced musth male and an experienced adult female. Amparo stands for him Waiting and Pascal, too, Waits. Often this is when Driving occurs.

Pascal has an erection which twitches to a full erection. Then Amparo initiates a Chase and Pascal tries a Reach-Over. The Chase continues for about 200 meters with both running or at a fast Walk and Pascal attempting to Reach-Over her to slow her movement. Amparo herself chooses to stop and the Rumbling of onlookers begins. With a full Penis-Erection attempts intromission. Amparo gives an Estrous-Roar and is streaming with Temporal-Gland-Secretion. Miranda - also in estrus, rushes over Rapid-Ear-Flapping. We can see a thread of semen. He achieves intromission on the 6th thrust; it lasts 32 seconds.

We hear a Social-Trumpet and Miranda Rumbles and Rapid-Ear-Flaps. A family member and calf approach Rumbling and there is more Social-Trumpeting. As he dismounts we can see semen gush from Amparo's vagina and she gives an Estrous-Rumble with Open-Mouth and Chin-Out. Miranda Rumbles and Amparo gives another Open-Mouth Estrous-Rumble. She steps forward giving another Estrous-Rumble with Open-Mouth and Tail-Raising. More Rumbling and Social-Trumpeting as the family and others gather around in a Mating-Pandemonium. Miranda, Amparo and a relative all Rumble. Miranda approaches Pascal and reaches Trunk-to-Genitals, which causes her more excitement and renewed Rumbling. More Social-Trumpeting. Amparo steps forward again Tail-Raising. Estrous female Miranda Runs-After her Ear-Folding and Amparo Runs-Away. Miranda Rapid-Ear-Flaps and Backs-Toward Pascal. Miranda stands Rapid-Ear-Flapping with Open-Mouth and is likely Rumbling. Pascal follows Amparo. (Amboseli, Kenya)

Pascal is in musth and Amparo is in estrus and they are in Consort. This is the 4th day that she is in estrus and she is at her peak. At the start of the clip we see Pascal standing next to Amparo with a Penis-Erection. Pascal then begins a series of courtship behaviors for 2 and a half minutes: Reaching-Over her and Resting-Head on her three times and in between these gently Driving her - pushing and nudging her from side to side and reaching his Trunk-Toward her.

Meanwhile, Amparo cooperates and shows she is ready by Backing-Toward him. She Stands-to-Mate. As the other elephants realise what is about to happen they walk toward her to watch. Tuskless Dram Rumbles and Amparo joins her with an Estrous-Rumble. Dram Rumbles twice more. As Pascal circles Amparo preparing her and himself, Dram walks over to sniff Pascals penis, reaching Trunk-to-Genitals and then Rumbles again. The tension in the group is palpable and two younger males in the background get into a Duel, Tusk-Clanking. An elephant Trumpets. Another male Runs-After them.

Meanwhile Pascal steps back and forth shifting his weight from one foot to the other as he prepares to lift himself onto his hind legs and Dram Rumbles again. Pascal mounts and appears to achieve intromission on the 5th thrust. As he enters her he raises up and we can see that Amparo appears to be lifted up by his penis - we see her Kick-Back with first one leg and then the other as she seems to be almost standing on her toes - her hind legs out-stretched. Pascal remains inside her for 29 seconds and the other males mill around them. As he begins to dismount we hear the Open-Mouth Rumbling starts in earnest - first by tuskless Dram and then Amparo begins her Open-Mouthed Estrus-Rumbling, and someone gives a Social-Trumpet. Amparo Tail-Raises and we see semen gush from her vulva. She Backs-Away giving more Estrus-Rumbles. Then we hear Dram Rumble again and then Amparo - back and forth many times as we can see by their alternating Rapid-Ear-Flapping. We hear someone give a Social-Trumpet.

A young male reaches Trunk-to-Genitals and she Kicks-Back at him a few times and Tail-Swats him. By now the Rumbling has tapered. (Amboseli, Kenya)

Pascal is in musth and Qadija is in estrus. Pascal has been Guarding her all day. We have seen signs that they are about to Mate.

As this clip starts Pascal with a Penis-Erection Pursues Qadija who engages in an Estrous-Walk, Looking-Back. As Pascal gets closer she slows. With an Open-Mouth Pascal Reaches-Over and she Stands-to-Mate. Pascal Mounts her and appears to achieve intromission on the 7th thrust. Rumbling a Snort-Rumble and Roar-Rumble by other family members can be heard.

Qadija Kicks-Back at Pascal and other males gather around them reaching Trunk-Toward them. Pascal is Mounted for 25 seconds and Rumbling by family members continues. As he dismounts Qadija rushes forward and gives an Estrous-Rumble which is answered by Pascal Musth-Rumbling and then another Estrous-Rumble by Qadija who then Head-Shakes and a Roar-Rumble by Queiroz. (Amboseli, Kenya) 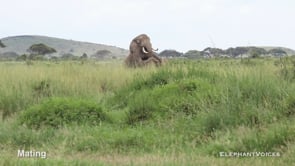 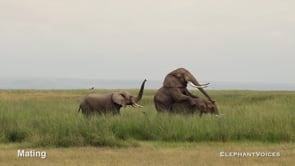 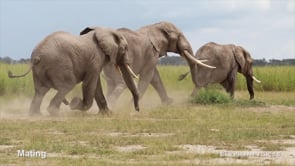 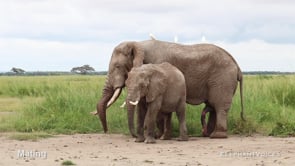 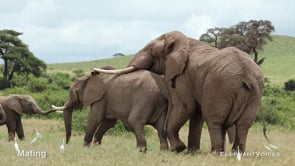 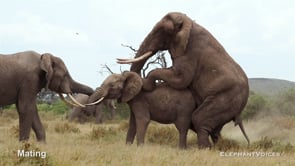