A persistent, prolonged and aggressive follow at a fast walk or run by one individual (usually in musth) after another (usually in musth). A pursuit often follows an escalated contest; when one male has signaled defeat by fleeing the victor initially Runs-After and then Pursues the defeated male for up to several kilometers. An elephant may also engage in Prolonged-Pursuit when seeing off vehicles.

The two males in this short clip are engaged in an Escalated-Contest that lasted for close to four hours. At this stage they have engaged in two bouts of Dueling and this Prolonged-Pursuit takes place before another Dueling bout. The male being pursued is slightly bigger than the broken-tusked pursuer, but the pursuing male has had help from a larger male who has weighed in each time the broken-tusked male appeared to be losing. Note the aggressive posture of the broken-tusked male - he is Ear-Folding and has an Open-Mouth. The fleeing male Looks-Back. (Amboseli, Kenya)

Early in the morning we met Emo in musth seeing off Teejay. Then some kilometers away we found Pascal. Over an hour or more Pascal was Listening and Musth-Rumbling. He seemed to hear Emo and came out meet him. In this clip he Advances-Toward Emo who Retreats-From. Pascal follows him over a kilometer or so for at least 15 minutes at one point Musth-Rumbling at him. Pascal followed him with a Head-High, Chin-In Musth-Walk posture, while Emo avoids him often Looking-Back. (Amboseli, Kenya)

Emo in musth (on the left) and Teejay not in musth (right) Advance-Toward one another. When they are about 25 meters apart Teejay stops Head-High but with a slight Chin-Out posture. Teejay one more step toward Emo and stops again, Foot-Lifting as Emo closes the gap to about 10 meters. Then Teejay turns and Runs-Away and Emo Runs-After him. As they begin to run we see clouds of dust rising from their backs. We hear the sound of them running and their ears flapping and we can hear Teejay give a V8-Rumble. On the spectrogram we find a big increase in sound between 4 and 20 Hz.

Elephants at some distance away would be able to pick up this acoustic signal between 8-20 Hz as well as its matching seismic signal. The Run-After continues for close to a kilometer and can also be classified as a Prolonged-Pursuit. (Amboseli, Kenya)

Context: AggresEsau not in musth (beautiful male with long tusks) is pursuing another male who is in musth. They have just had a brief fight which we were too far away to capture. in this clip Esau presses his advantage in a Prolonged-Pursuit. Notice that Esau checks the tips of his tusks to see that they are ok. (Amboseli, Kenya) 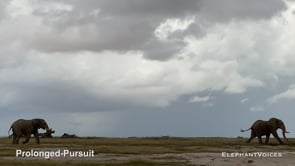 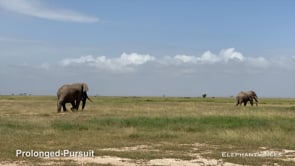 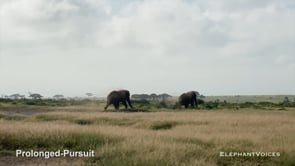 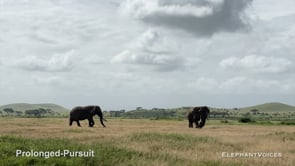