An attentive elephant playing with an object in a desultory or distracted fashion. Performed in conflict situations such as in Aggressive, Submissive, Conflict & Confrontation, Courtship, and Social Play contexts when an individual shows incompatible tendencies, such as fleeing versus attacking.

This behavior occurs in the following context(s): Movement, Space & Leadership

Juvenile female about 6 years old is Foot-Swinging as she fiddles around with a stick. In the context she appears to be bored and Waiting for others to move along. (Maasai Mara, Kenya) 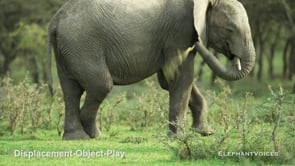