The term Urinating refers to normal elimination as well as social or sexual responses. Normal elimination may stimulate others to Urinate. For instance when a group wakes up from Resting, most individuals may Urinate and Defecate.

In an Advertisement & Attraction or Courtship context, such as during Trunk-to-Genitals, Female-Chorus or Mating-Pandemonium, female adults, adolescents and juveniles will typically Urinate when a male, particularly one in musth, uses his trunk to touch or sniff her genitals, in response to the arrival of a musth male in the group, or during or following a Mating.

Extreme social arousal such as during High-Fiving, Greetings, or a variety of other Bonding-Ceremonies also stimulates female adults, adolescents and juveniles to Urinate. During these sexual and social contexts Urinating is typically associated with vocalising, and several females may Urinate simultaneously.

An adult female pauses to Urinate and a musth male with a wide streak of Temporal-Gland -Secretion tests her urine and performs Flehmen. (Amboseli, Kenya) 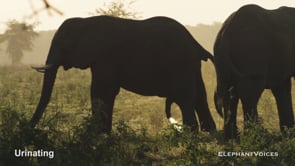 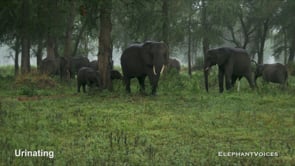 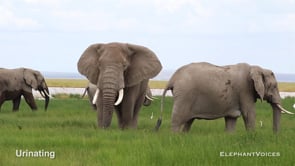