Mama Little E, Little E (14 days old) and Lorato are out of sight in some bushes with a couple of young, troublesome males. A loud calf Roar is heard and we guess that Little E got frightened or hurt by one of the young males. Mama Little E and perhaps Lorato respond with a Coo-Rumble. Mama Little E Backs-Toward the others trying to rescue Little E. She looks alarmed and she gives a loud Protest-Trumpet.

The matriarch, Qoral has just Pushed her daughter Qadija, who is in estrus. Qoral has for some time been trying to get everyone to move into the woodlands and Qadija being in estrus is slowing things down. Unfortunately, we missed the moment when this happened, but afterwards they seem to Greet one another.

As they are interacting, ten year old Qaskazi approaches cautiously trying to get close to Qoral's infant again. She seems wary of Qadija - and she is right to be! Qadija swiftly turns on her and Tusks and then Advances-Toward her and Qaskazi Retreats-From. She makes a wide arc around and away from Qadija and then back to where she started, meeting her mother Qasima there and Ear-Brushing against her. Qoral meanwhile as continued to call, her Rumbling now sound like Lets-Go-Rumbles and the family gathers around her. (Amboseli, Kenya) 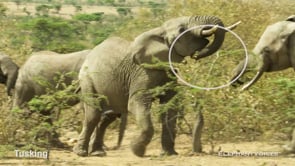 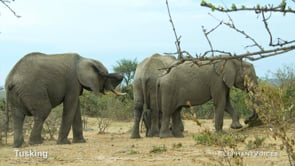 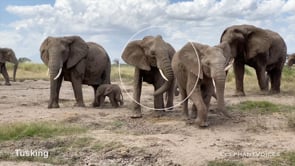