A young male reaches his Trunk-Toward us as he contemplates whether to depart. (Gorongosa, Mozambique)

Matriarch Gina's adolescent male approaches the filmmakers car and Trunk-Toward them in curiosity but his slight Body-Jolt and Ear-Spreading suggests an element of vigilance. (Maasai Mara, Kenya)

An adult female Trunk-Toward something in the vegetation in the lugga. It seemed that it might have been the young male, but then another elephant was frightened by something in the river bed and gave an Alarm-Trumpet. We guess that the female is interested in whatever caused the previous fracas! (Maasai Mara, Kenya)

Provocadora leads her family in a Procession. As she walks she reaches her trunk outwards in a Trunk-Toward, presumably sniffing toward us. (Gorongosa, Mozambique)

gf0016 reaches his Trunk-Toward us as he investigates us. (Gorongosa, Mozambique)

One young male stands in the track standing attentively. Another stands just out of our view on the side of the track; he is concerned about our presence and stretches his Trunk-Toward us presumably to get our scent. Then he crosses the track and moves away while he Looks-Back at us. The other male sniffs us too. (Gorongosa, Mozambique) 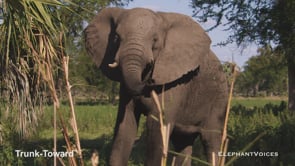 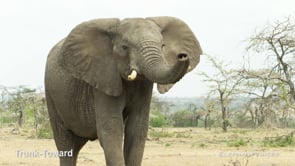 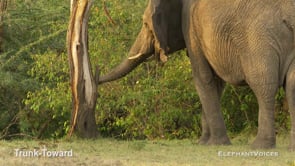 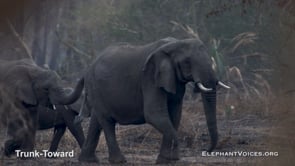 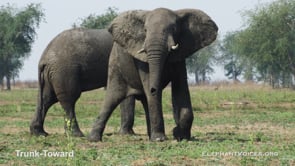 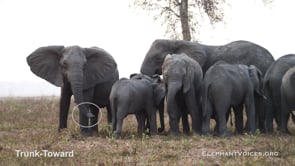 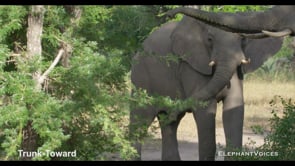