Noyeau of the ND family has a newborn and everyone in the family is excited. The infant goes over to another large adult female Nekeisha and Noyeau gently Pushes and Tusks her out of the way to retrieve her infant. At this moment the rest of the family arrives and reaches Trunk-Toward the infant. A juvenile female gives a Social-Trumpet and there is Rumbling and a bit of a kerfuffle, Noyeau Head-Shakes. They turn and all go off together. (Amboseli, Kenya) 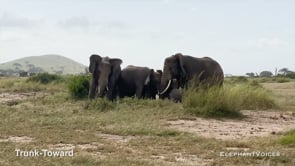