Reaching of the trunk to touch, or near touch the genitals of another. Trunk-to-Genitals is a common behavior and occurs between elephants of all age/sex groups in a broad range of contexts. It is likely that such behaviour is often related to assessment of physical or sexual state, such as male assessment of female receptivity and female and male assessment of male musth state, or assessing the physical state of an infant.

Yet, it is not always the case that this behavior has an olfactory function. For instance calves Soliciting-Suckling have been observed to touch and even ‘pinch’ their mother’s genitals in an action that appears to be aimed at getting her attention. Likewise, mothers and allomothers touch the genitals of infants, apparently to get their attention before moving off or in an attempt to Guide them toward or away from something. Mothers and allomothers also regularly touch the genitals of infants in what appears to be a gesture of reassurance.

Trunk-to-Genitals often occurs during greetings between various age/sex individuals and during Sparring mostly between males. Elephants are very tactile animals with a tremendously perceptive sense of smell. More research is required to fully understand why elephants touch the genitals of other elephants.

In slo-mo: A young adult male gm0049 approaches large adult female Valente, gf0013, who is Urinating. He reaches his Trunk-to-Genitals under her belly, though we cannot see very well. (Gorongosa, Mozambique)

Pictured are the Mabenzi family members and musth male, Gogogo. Gogogo approaches Valente and tests her Trunk-to-Genitals. She Tail-Swats him. (Gorongosa, Mozambique)

A group is resting in the shade under a tree. A young male with splayed tusks reaches Trunk-to-Genitals to test an adolescent female. (Maasai Mara, Kenya)

Little E is 8 days old and his mother is being tested by a young male who reaches Trunk-to-Genitals. He is especially interested in the blood "stain" on her leg from the birth. He Flehmens after sniffing it. Then he proceeds to reach his Trunk-to-Genitals of another female. (Maasai Mara, Kenya)

A large male with a collar named Polaris, is moving through the group testing females. He tests (Trunk-to-Genitals) an adolescent female. (Maasai Mara, Kenya)

An adult female Advances-Toward a younger female who Retreats-From. A young male follows and tests (Trunk-to-Genitals) the advancing female. She monitors him with a Look-Back and Trunk-Toward. (Maasai Mara, Kenya)

As the clip starts we see an adult female starting to walk into center frame. Then a young male walks into frame from the left. As the young male approaches the female turns quickly to Rump-Present to him and he reaches Trunk-to-Genitals to test her.

As a second female walks into frame we can see the male performing Flehmen and then he sniffs her again. (Maasai Mara, Kenya)

A young male walks toward an adult female (larger than he is) and sniffs her genitals (Trunk-to-Genitals). Simultaneously, an infant raises its Trunk-Toward him and touches him. The adult female Look-Back at him and Touch-Self. He puts his trunk in his mouth to Flehmen, and considers. Then he Ear-Brushes her, in a pushy rather than totally friendly way, and Forward-Trunk-Swing at her x 2 or is this a Trunk-Toward.

On the second one a tuskless adolescent (foreground right) raises Trunk-Toward him in a Forward-Trunk-Swing kind of motion, as if she is intervening to help her presumptive mother. It is as if the normally friendly Ear-Brush is compensation for what is otherwise pushy behavior by a young male. (Gorongosa, Mozambique) 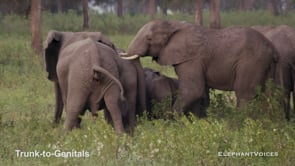 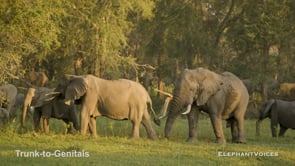 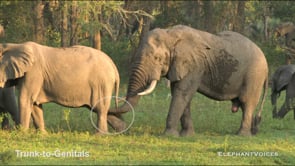 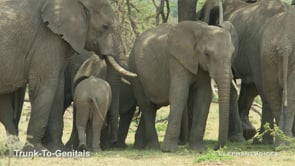 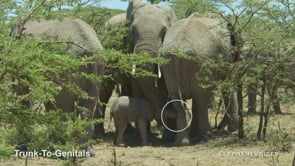 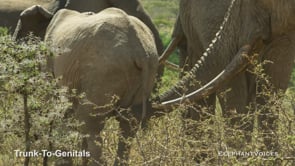 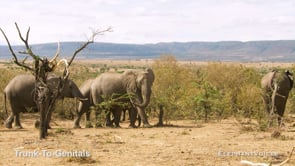 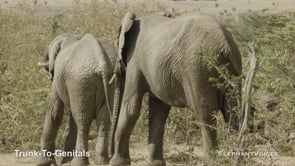 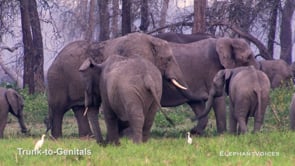