Reaching of the trunk to touch, or near touch the face of another. Trunk-to-Face is a common behavior and occurs between elephants of all age/sex groups in a broad range of contexts and may include Trunk-to-Temporal-Gland, Trunk-to-Ear. In a Calf Reassurance & Protection context, Trunk-to-Face is a common component of Caressing behavior displayed by mothers and allomothers toward infants and calves to bond with, reassure and protect them. Mothers also appear to use Trunk-to-Face to get the attention of infants before moving on or in an attempt to Guide them toward or away from something. During Social Play, Affiliative as well as other contexts elephants also reach the trunk to the face of other elephants, often in the area of the temporal glands and the mouth.

This behavior is often observed during Sparring and following meeting/greeting of individuals. Elephants are very tactile animals with a tremendously perceptive sense of smell. More research is required to fully understand why elephants touch different parts of the faces of other elephants. 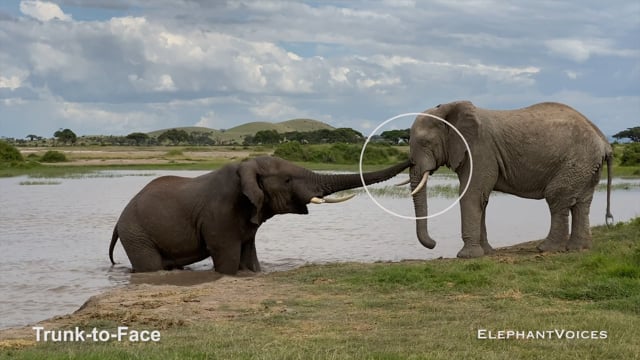