Sucking on own trunk. Appears to be done when unsure, apparently for comfort. Infants and calves are typically observed exhibiting this display, but older elephants may also be observed to Trunk-Suck.

We are with the C family: gf0080's 2013 infant is with allomothers who are feeding. Something happens that we can't see and the infant becomes alarmed and starts to move, first toward mother and then back to allomothers, while it Touches-Self and Trunk-Sucks. The camera pans out and we see gf0080 Standing-Tall facing the camera. She seems to be on her way to retrieve her infant. (Gorongosa, Mozambique)

Vigilante (one tusked female) has been trying to Initiate-Movement with a Purposeful-Walk past the others - but, though some follow her, Valda (big tuskless matriarch) is not ready. So she and the others Wait.

A young male stands at the front of the group worrying a wounded lip with the tip of his trunk and using an interesting technique to eat grass - apparently biting off the soil before eating the clump. Then he stands Trunk-Sucking. Vigilante meanwhile continues to be vigilant looking in our direction and adopting Periscope-Trunk. (Gorongosa, Mozambique)

An 18 month old male calf has been left behind and hurries to catch up with his family. As he nears his mother he begins Trunk-Sucking perhaps as a comfort behavior. (Maasai Mara, Kenya)

Little E is only 4 days old. Allomother Lorato has defecated. Little E is interested. Mama Little E touches his genitals (Trunk-to-Genitals)and his anus, holds his tail and then Trunk-to-Genitals again three times. Little E then begins to Comfort-Suckle from allomother Lorato who adopts a Suckle-Stance. He stops and Mama Little E comes over and touch him under his mouth (Trunk-to-Mouth) and then along and up his trunk as she turns slightly away from allomother Lorato - Guiding him away from Lorato and toward her. He turns toward her.

As this is taking place, Lorato engages in a series of Ambivalent behaviors - Touch-Face, Trunk-Sucking and then steps forward and begins Displacement-Grooming - Dusting but not really. Mama Little E walks on behind Lorato also Trunk-Sucking and Little E goes in front of her. As he passes by Lorato touches his genitals (Trunk-to-Genitals). (Maasai Mara, Kenya)

Big Mama's teenage son is walking along following his mother. His eyes are almost closed and his head is carried low. He appears to be "to be lost in thought" or in "his own world" - Contemplative. (Maasai Mara, Kenya)

The calf known as "Tailless" is walking alongside his mother while Trunk-Sucking and Head-Waggling. The combination of what might be called "comfort" and "soliciting play" behaviors and the fact that he is not engaged in play with another suggests to us that we are seeing an expression of his inner thoughts - as if he is contemplating something he experienced - or would like to experience with another. (Maasai Mara, Kenya)

In the Mara a small number of elephants have discovered pleasure in standing over Croton bushes. Lorato is one of the elephants who engages in this idiosyncratic behavior and regularly gathers up the branches of small bushes between her legs and stands over them going into a kind of dreamy state. In this clip Lorato walks along Trunk-Sucking after having just ended a bout of Stand-Over-Bush. She looks as if she is still in a state of contemplation. (Maasai Mara, Kenya)

Allomother, adolescent female Lorato opens and closes her eyes as if in Contemplation. She has just been very focused on the genitals of four day old Little E. When a 1.5 year male walks past her and gets down on knees to bite a plant, Lorato considers Mounting him. She Reaches-Over his back while Trunk-Sucking and lifts her foot as if to Mount. It would appear that she has conflicting feelings and then thinks better of her plan. Attentive or Ambivalent? Hmmm. (Maasai Mara, Kenya)

A juvenile female about 6 year old stands engaged in a series of behaviors - Foot-Swinging,Displacement-Object-Play and Trunk-Sucking. She appears - to us - to be contemplating something as she waits for her family to depart. (Maasai Mara, Kenya)

A one year old calf is lying down resting. The calf looks very dozy. He puts his trunk in his mouth and sucks on it. (Maasai Mara, Kenya)

In slo-mo: Two juvenile males are sparring. one bigger than the other. A young female decides that they are being too rough - or perhaps the older male is not part of the family - or perhaps she wants to play. In any case, she intervenes. She Orient-Toward them and Head-Shake and then Look-At the older one while Trunk-Sucking. Then she Advance-Toward them and the older male Backs-Away. (Gorongosa, Mozambique)

gf0045 and G7 are Sparring. In the midst of their game they pause and gm0045 Trunk-Sucks and then reaches for branch - Displacement-Feeding - and then returns to Trunk-Sucking before initiating Sparring again. (Gorongosa, Mozambique)

In what appears to be an act of Conciliation he touches the smallest male, and the seems to Rump-Present and gm0009 leans into him and touch him Trunk-to-Genitals. The next scene shows the little aggressor, in the middle and the other two in a Reach-Over. Then both step back, gm0009 Trunk-Sucks and the other male Touch-Self again. Hard to see whether gm0009 might have touched the little male's genitals again. (Gorongosa, Mozambique) 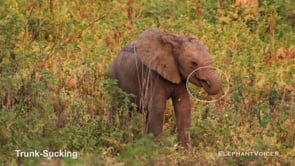 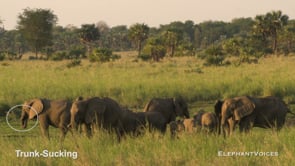 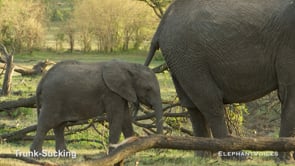 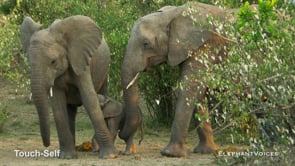 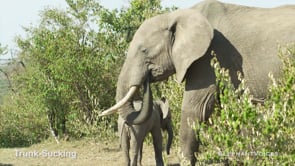 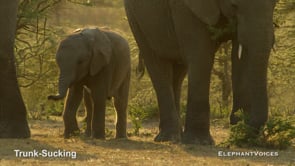 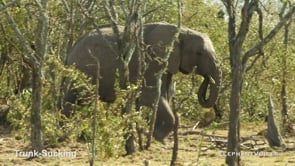 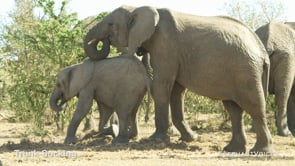 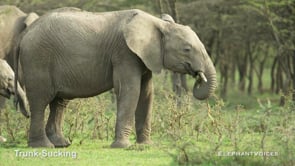 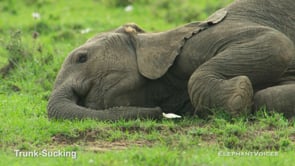 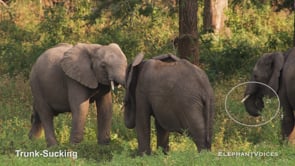 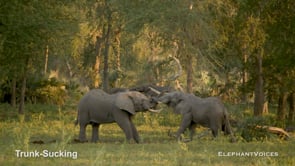 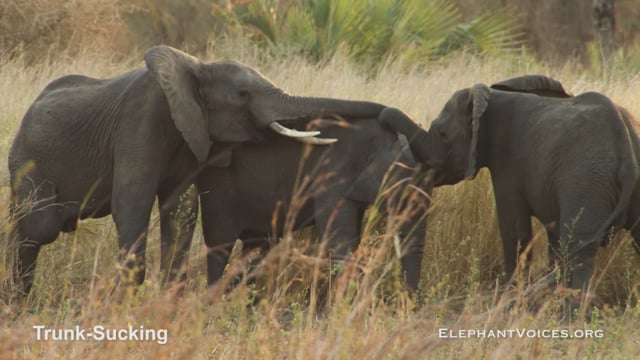