Streaming of secretion from the temporal glands of non-musth elephants. Temporin may be ephemeral or sustained and is more frequently observed among females. Many socially stimulating interactions within families are associated with the sudden onset of Temporin among adult females and, most often, their female offspring. These secretions may stream down the side of the face within seconds of the onset of the interaction. In these cases the onset of Temporin usually appears to be associated with vocalizing and typically dries within 10-15 minutes.

In East African populations, our observation is that sustained Temporin is more likely to be observed among females and when they are separated from their families or when individuals are disturbed. In these habitats Temporin is more frequently observed in the dry season, due, we believe to the fact that relatives are forced to split into smaller groups.

In Gorongosa, Mozambique, this pattern does not hold. Most elephants, no matter the age or sex, secrete from the temporal glands during both dry and wetter periods, and when they are in large and small groups. While the population is fearful and aggressive toward people, we do not believe that stress is the reason for the difference observed. Much more research is needed to understand the function of Temporin among elephants.

Pat Derby, Ruby and others come together with a Purposeful-Walk. As they approach one another we hear deep Greeting-Rumbles and they begin Rapid-Ear-Flapping, A young female opens her mouth (Mouth-Open) and gives a loud Social Trumpet. Ruby (tuskless) is streaming with Temporin. The Rumbling continued as they move rapidly forward with Pat Derby in the lead. Pat Derby gives a loud Ear-Slap and as she turns we see that she, too, is streaming with Temporin.

As they come closer to the camera we hear more and very clear Greeting-Rumbles. Ruby pauses to Urinate and we see that in addition to Temporin she has Ear-Secretion. Pat Derby comes forward and stops to Listen, then she rumbles really loudly as if in response to someone she can hear. Ruby listens, too and we think we heard a distant call - several respond. All get Temporin even the calves though the adult females are really streaming.

A minute later they meet the others and there is a loud exchange but the filmmakers had car difficulties. We hear roaring and a social trumpet. We see later that the Greeting-Ceremony that the filmmakers missed is with Gina f0263 and others. (Maasai Mara, Kenya)

Nayanka steps forward with Periscope-Trunk. Her daughter Nastya has just been Mounted and the family was Rumbling. I believe this is why her mother has Temporin F-4. I say that Nastya is being Chased again and then Nayanka Head-Raises and gives a Contact-Rumble. There are two calls before her call and one after. I imagine that at least one of these is Nastya. (Amboseli, Kenya) 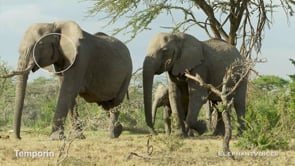 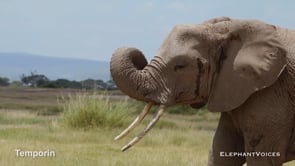 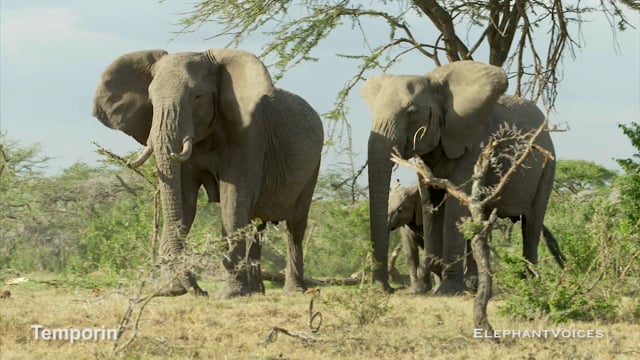